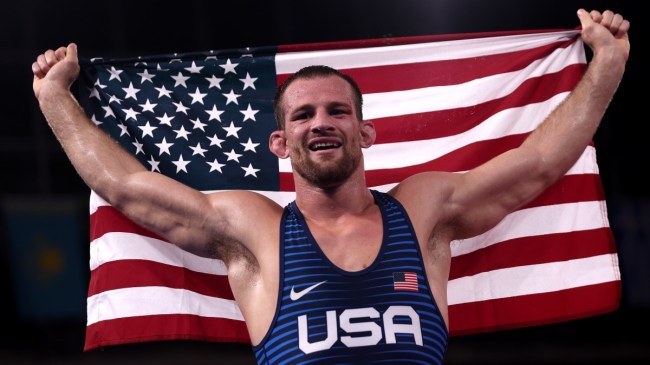 David Taylor has long been a heralded wrestler. The four-time Ohio State champ in high school went to Penn State. There, he made the NCAA finals four times, winning twice, and was the two-time winner of the Hodge Trophy, college wrestling’s Heisman Trophy. After winning the World Championships in 2018, he tore his ACL but was ready in time for the Tokyo Olympics.

There, he shocked the nation’s most popular athlete and Iranian national hero, Hassan Yazdani to win gold. But, they had a rematch later that year at the World Championships where Yazdani came out on top.

Taylor gets the best of Yazdani this time

They call Taylor the Magicman because he can seemingly score from anywhere. And, it was on display in his 7-1 win over Yazdani in the 2022 86 kilograms World Championships final. Taylor seemed dead to rights many times, but out-scrambled the Iranian hero and had the only offensive points of the match.

He left no doubt that he was the best 86kg wrestler in the world, and possibly the best pound-for-pound in the world as well.

The international wrestling community was ablaze with takes after what is probably the feature match at this year’s World Championships in Belgrade, Serbia.
Taylor is known for his ferocious pace and constant attacks and that paid off for him in his match against Yazdani.

David Taylor is so relentless, his pace is ridiculous. Awesome match and awesome win. He wanted that one bad. Congrats to @magicman_psu!!!! World Champ!!!!

His former teammate at Penn State Matt McCutcheon called him the king. He is certainly the king of that weight class right now.

Ironically, wrestling is much bigger in Iran than the USA. A significant amount of Iranians know who the Magicman is and it’s probably a higher number that do than in the USA.