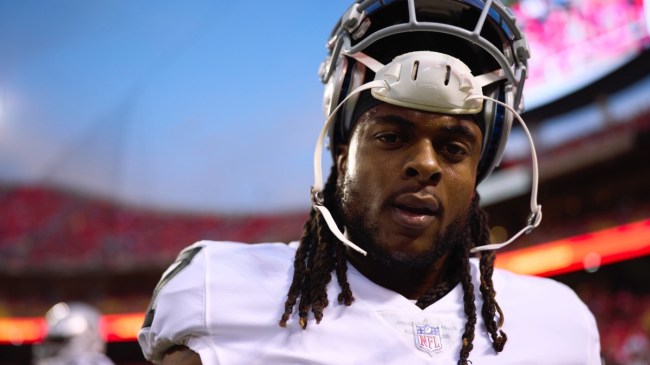 Davante Adams is arguably the league’s best receiver. After starring for the Green Bay Packers, the five-time pro bowler took his talents to Las Vegas as the Packers traded their star wideout to avoid paying him. Adams got a five-year, $141.5 million deal and became the highest-paid wide receiver ever.

And, in Monday Night Football’s game between the Kansas City Chiefs and Raiders, Adams looked excellent. His night was highlighted by this sick throw and catch between quarterback Derek Carr and Adams.

He had another long touchdown earlier.

DAVANTE ADAMS BREAKS FREE FOR A TD ON 4TH DOWN🔥

But, on the Raiders’ last drive, disaster struck and Adams acted poorly after, embarrassing himself after.

Davante Adams had a key drop and later shoved a cameraman

On the final drive of the game, the wideout broke free for what would’ve put the Raiders in field goal range to win the game. But, he couldn’t come down with the pass. It was a shocking drop for such a good player.

Then, on the last offensive play of the game for Las Vegas, he and Hunter Renfrow ran into each other.

The officials were so bad tonight they missed a clear defensive pass interference against Renfrow covering Adams pic.twitter.com/qakso949SW

Mistakes happen, and he played a heck of a game. But, he compounded his error by taking his frustration out on a cameraman.

Honestly disgusting behavior. Davante Adams should be suspended for AT LEAST one game with a heavy fine. This is akin to Dennis Rodman kicking the cameraman in Minnesota which was an 11 game suspension. That equates to just over 2 NFL games. pic.twitter.com/jbrBt7t3pu

That looks really bad and could get Adams a suspension. That’s something the 1-4 Raiders certainly cannot afford.

Most agree the behavior was unacceptable

Most anyone who saw the video is pretty unanimous in thinking that shoving the cameraman was reprehensible.

@nfl. Bush league move post game, frustrated I get it but that’s assault of a cameraman. Should be addressed. @ESPNNFL pic.twitter.com/TOiqAh8S5K

Davantae Adams should be suspended for atleast 1 game. Bush league clown. Accept the loss like a man. Not the cameraman’s fault you made a poor decision by joining the Raiders and running into your own player. pic.twitter.com/lPyDOpxWHE

And, this angle makes it looks even worse for Adams. The cameraman didn’t do anything to make him mad. Just a loss of control by Adams.

Here's a second angle. In case you're wondering, the cameraman is clearly not filming him. He's in the way, yes, but he's not up in Adams' grill or anything. He looks to just be harmlessly unaware. pic.twitter.com/8pxQE7pExy

It will be interesting to see what kind of discipline comes out of this.