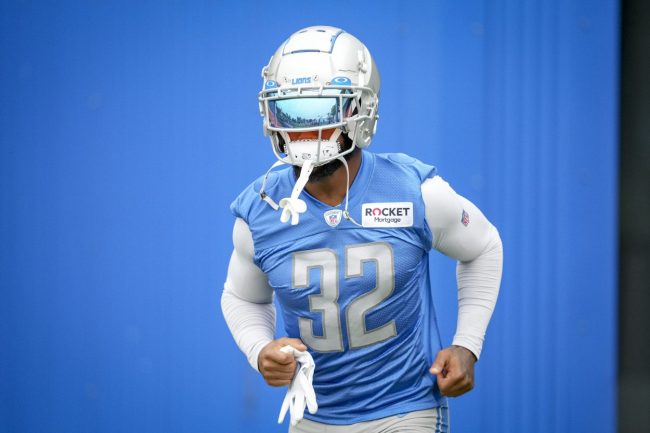 The Detroit Lions haven’t had much to get excited about in recent years. The team hasn’t finished above .500 since 2017 and is devoid of star players.

Second-year head coach Dan Campbell is working to turn that around, however, and rookies Aidan Hutchinson and Jameson Williams have fans excited for what’s to come.

Another young player that could break out for the Lions is third-year running back D’Andre Swift. Swift was selected with the 35th overall pick of the 2020 NFL Draft and has flashed at times in each of his first two seasons. The Georgia product has 1,138 yards and 13 touchdowns in 26 games played. He’s also hauled in 108 passes for 809 yards and four scores in that time.

Now, the Philadelphia native hopes to take his game to the next level.

Lions RB D’Andre Swift said his goal this year is to rush for 1,000 yards and have 1,000 yards receiving. He said with Duce Staley coaching him he thinks he can reach both marks.

Swift is now under the watchful eye of new Lions running back coach Duce Staley, whom he watched growing up with the Philadelphia Eagles. He’s set a lofty goal of 1,000 yards each on the ground and through the air in 2022, a feat that’s only been accomplished by three players in NFL history.

Roger Craig first did it for the San Francisco 49ers in 1985. Marshall Faulk matched it in 1999 with the St. Louis Rams, and Christian McCaffrey most recently reached the milestone in 2019 with the Carolina Panthers.

Now Swift hopes to be next, and Lions fans are all-in on his big goal.

Detroit fans and fantasy football players alike perked their ears up at the comments. But now that he’s established as the Lions’ RB1, it’s not out of the realm of possibility.

If you come at the king, Antonio Brown, you best not miss…https://t.co/u3I6XILILy

A monster season from Swift would go a long way toward turning things around in the Motor City.