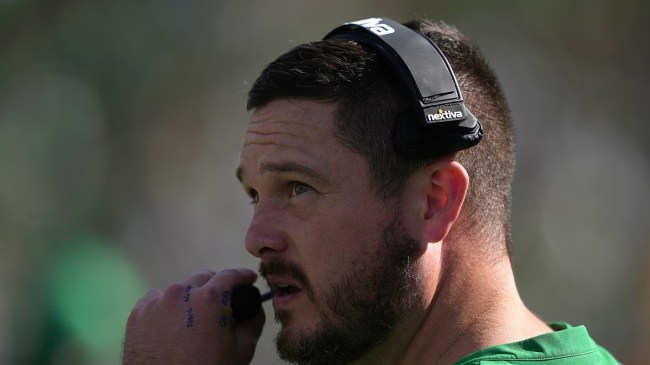 The Auburn coaching saga has been well-documented by now. After. A disastrous season-and-a-half, head coach Bryan Harsin was fired after their week eight loss to Arkansas. The program is in pretty rough shape, especially considering its mammoth resources. And, it will take quite the coach to turn it around.

A lot of big names are being thrown around. Lane Kiffin, Hugh Freeze, and Dave Aranda are coming up a lot, as is Deion Sanders.

But, on Sunday, there was a report that first-year Oregon coach and former Georgia defensive coordinator Dan Lanning was interested in the job. That would be a home run hire by the Tigers, as Lanning has looked fantastic as a head coach after their week one blowout loss to Georgia. And, he’s familiar with the south and knows what it takes to win in the SEC.

Naturally, Lanning had to address the rumors so as not to cause a distraction to a team that is still very much in the thick of the playoff hunt. He did so on Monday.

Lanning took the time so speak about the rumors on Monday.

Oregon’s Dan Lanning was asked about a fan blog affiliated with Sports Illustrated reporting “mutual interest” between him and Auburn.

Lanning’s initial response — shaking his head in disbelief — is what you’d expect.

Media literacy is important, even in the silly world of CFB. pic.twitter.com/YKKSGwAHZZ

Dan Lanning: "The grass is damn green in Eugene and I want to be in Eugene for as long as Eugene will have me."
So yeah, Auburn ain't happening and was never happening.

That is a pretty direct refutation of the rumors. Granted, that means nothing in college football. We’ve seen coaches deny such things before, only to leave their school for greener pastures.

1) I don’t think he’s leaving but 2) LOL at anyone thinking that means he wouldn’t leave. What’s he supposed to say?

Still, this has to be welcome news to Oregon fans, who do not want to lose their 2nd head coach in as many offseasons. Mario Cristobal left for Miami after last season.

The Ducks take on rival Washington this Saturday.