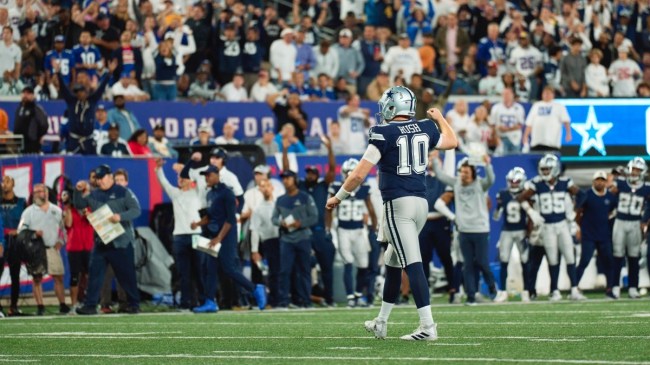 Dak Prescott is supposed to be the franchise quarterback for the Dallas Cowboys. That’s why Dallas gave him $121 million guaranteed last offseason. Dak rewarded them with an NFC East title and a playoff spot last year.

But, disaster struck when Prescott hurt his thumb on his right throwing hand in week 1 against the Tampa Bay Buccaneers. Many thought the Dallas season was all but over.

Cooper Rush went undrafted out of Central Michigan in 2017, but has hung around in the league. He replaced Prescott for their week two game against the defending AFC champions Cincinnati Bengals and beat them 20-17. Then, in week 3, he beat the Giants 23-16 on Monday Night Football and played well against a Giants’ defense that had been stingy up to that point.

Now, people are wondering if Dallas plays better with Rush at quarterback. After all, they got blown out week 1 with Dak Prescott and have won two straight since.

First off, give credit to Barstool’s Dave Portnoy, who was on the Rush bandwagon even before his Monday Night Football Win.

This Cowboys fan make an astute point. After the Dallas offense looked awful in week 1, people blamed everyone but Dak. Rush is playing with the same players.

Cooper Rush is revealing that all the talk about no offensive line and no receivers for Dak was just excuses. #DallasCowboys #MNF #Giants

Skip Bayless, the most famous Cowboys fan maybe on the planet, is warming up to the former Chippewa.

All I know is this: I'm certainly not saying Cooper Rush is better than Dak Prescott … BUT HE HAS PLAYED BETTER IN HIS THREE STARTS, TWO ON THE ROAD, THAN DAK HAS AGAINST GOOD TEAMS OVER HIS LAST 12 GAMES.

NFL legend Phil Simms looks brilliant for saying there would not be that big of a drop-off between Rush and Prescott.

Phil Simms right now after saying there wouldn't be a huge drop-off from Dak to Cooper Rush pic.twitter.com/G2yhpXEajM

No wonder why Prescott is rushing back from his injury.

Cooper Rush is ballin'. I see why Dak is trying to come back next week lol

Who knows if the Cowboys have the courage to actually bench Dak Prescott. If they do, it will be one of the biggest NFL stories of the year.