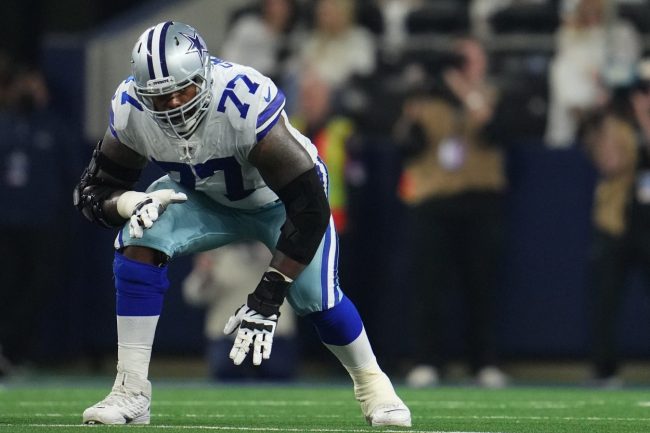 The Dallas Cowboys were already in a difficult spot offensively heading into the 2022 NFL season. Dallas’ wide receiver depth chart is currently held together by shoe string and bubble gum. Ezekiel Elliott is likely in his last season with the team. And the Cowboys’ offensive line is a hodgepodge of injury prone veterans and young guns who have yet to prove themselves in the NFL.

Well, unfortunately for Dallas fans, things got worse on Wednesday. The inevitable struck with superstar left tackle Tyron Smith went down injured at practice. Smith is an eight-time Pro Bowler and likely future Hall of Famer. But the USC product has been extremely injury prone in recent years. He’s not played a full season since 2015 and played just 13 of 33 potential regular season games in the last two years.

Now it appears he’s set for even more time on the shelf, and it appears won’t be a short stay, either.

More on Cowboys’ LT Tyron Smith suffering a torn hamstring during Wednesday’s practice that will sideline him indefinitely, sources tell @toddarcher and me.https://t.co/Yk8IzMKZ1e

ESPN’s Adam Schefter reports that Smith suffered a torn hamstring and is out indefinitely, with the time out being counted in months rather than weeks.

Dallas used its 2022 first-round pick on offensive lineman Tyler Smith out of Tulsa. But the rookie is considered a long-term project at tackle and has practice and played primarily at left guard.

Needless to say, Dallas fans are not happy about the situation the team is in,

It has always been wild that the Cowboys thought they were in good shape at OT. Completely mystifying.

Yes, they do have Tyler Smith, but they are now done with the most important part of the year for player development & he spent most of that time at guard.

This was the classic "not if but when"… Love that guy but damn the writing is on the wall.

Mystifying they would sign Dak to a franchise QB contract and then not do everything it took to put him in position to succeed.

Truly do not understand it.

It’s astonishing how they have a $160 M investment in Dak Prescott and they thought to themselves “an aging/injury prone Tyron smith is enough to protect his blindside” and completely ignored OT depth.

But I heard Stephen Jones signed Cap Space to play OT. We’ll be okay as long Cap Space is ready for week 1 . SMH

Dallas now has limited options just weeks from the start of the regular season. One life line could come from the New England Patriots. New England is reportedly shopping 2018 first-round pick Isaiah Wynn. Wynn is a Georgia product who has started 33 games in the last three seasons for the Patriots.

Dallas begins the regular season on Sept. 11 against the Tampa Bay Buccaneers on Sunday Night Football.