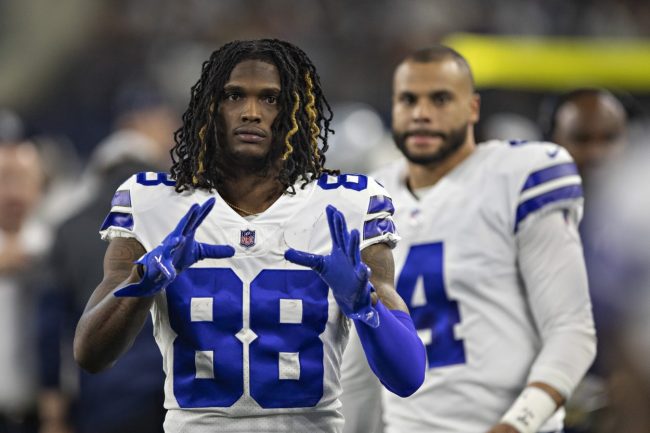 CeeDee Lamb’s first two seasons with the Dallas Cowboys have been an unbridled success. The Cowboys’ first round pick in the 2020 NFL Draft has caught 153 balls for 2,037 yards and 11 touchdowns. He made his first Pro Bowl last year and is quickly becoming one of the best young wideouts in the league.

But now he’ll have to take his game to another level. Dallas traded star receiver Amari Cooper to the Cleveland Brown for just a fifth round pick in the offseason. While veteran wideout Michael Gallup is recovering from a torn ACL and will likely miss the beginning of the season. That means Lamb becomes the team’s top target and, in turn, will likely square off with opponents’ best cover corners.

That’s a big ask for the third-year player, but early indication are that he’s up to the test. Don’t believe us? Just check out this ridiculous one-hand snag Lamb made at training camp on Friday.

Lamb’s ball skills are some of the best in the league and present a dangerous weapon for Cowboys star quarterback Dak Prescott. And Dallas fans are pretty excited about what the duo could become as the season progresses.

Those Ceedee not a number 1 haters about to disappear https://t.co/AsdugjD6j8

But Lamb isn’t the only young wide receiver making noise at Cowboys training camp. Texas Tech product TJ Vasher, the nephew of former Pro Bowl corner Nathan Vasher, joined the team as an undrafted free agent a year ago. An injury cost him most of the season, but Dallas kept him around. Vasher got a significant amount of work at OTAs due to the team’s injury situation, and now he’s continuing to turn heads.

This is why people are excited about TJ Vasher. Goodness what a snag. pic.twitter.com/FcRdlMz1MI

Maybe Dallas will be okay without Amari Cooper after all?