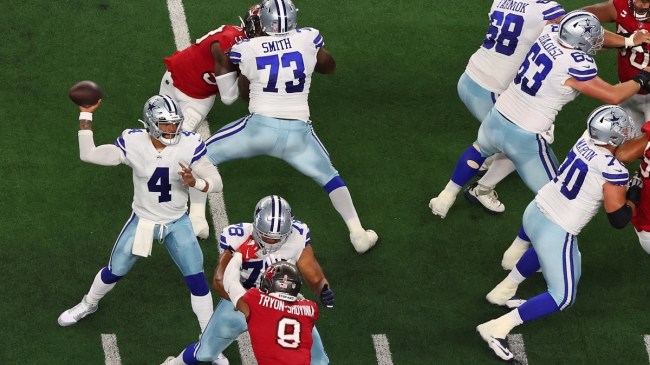 Dak Prescott has to be healthy for the 2022 Dallas Cowboys to have any chance at success. Of course, he did not stay healthy for very long starting the year, and he broke his thumb on his throwing hand during their week one loss to the Buccaneers.

Many feared the worst when he was injured, as the Cowboys’ backup quarterback options were not good. But, Cooper Rush did go beat the Bengals in week 2 and now there is promising news regarding Dak’s return to play.

Dak Prescott could return to play as early as next week

On Tuesday, Jerry Jones went on 105.3 Radio in Dallas and said that the timeline for Dak’s return is moving up and he could only miss one more game.

Jerry Jones says Dak Prescott could be back sooner than expected 👀 pic.twitter.com/PCZeEI5EQb

This is welcome news for Dallas fans. Despite Cooper Rush going out and getting a win over the defending AFC Champion Cincinnati Bengals, I think everyone can agree that Rush is not a long-term option and if he had to play an extended number of games that would be a wasted season.

It would be a very fast return to play for Prescott if he were to play next week as that would make it just 20 days in between injury and return to play.

The news is provoking mixed reactions

I thought that I would find twitter full of happy Cowboys fans. But, most of the Twitter reactions are just the gripes of Dallas fans.
@Hype-Phinest thinks Cowboys fans have been swindled and that Jerry Jones is selling a bill of goods

Just realized something… Cowboys fans. Isn't it interesting that the front office has alluded to not making many moves because of cap constraints and the QB taking a lot of money…

This is a take I definitely don’t agree with, even if I don’t think Prescott is elite or even good enough to win a Super Bowl.

Of course, if they waited a few weeks they could conceivably be 3-1 and have an all-the-way-back Dek Prescott healthy for week five instead of rushing him back.

Cowboys Dream scenario go into NY absolutely shut them down with the defense and run the ball down there throats and go back home to take out Washington and be 3-1 with Dak return in sight.

As with anything with Jerry Jones involved, I’m sure the drama will be ongoing.