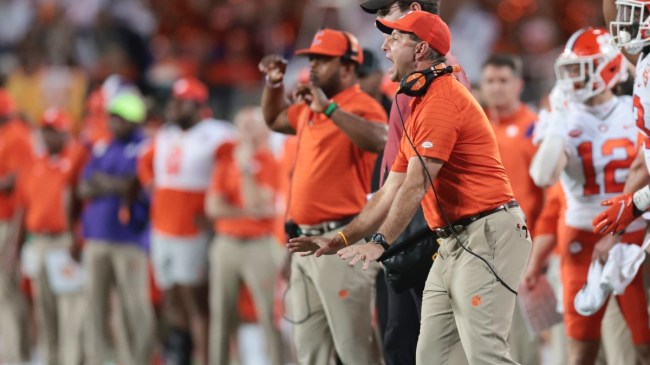 Clemson Coach Dabo Swinney raised eyebrows with his comments on the Rich Eisen Show about the budding quarterback controversy at Clemson. Dj Uiagalelei started and struggled last year for the Tigers. He is being pressured by Freshman Cade Klubnik.

Here is what Swinney said on the radio show:

“We’ve got three five-star quarterbacks in our room,” Swinney said. “D.J. [Uiagalelei] has earned the right to be the starter without question, but Cade [Klubnik] has demonstrated that he can win for us based on what we have seen in practice and he finally got a little game experience. He certainly proved that he deserves the opportunity to play within the flow of the game or the season as we go.”

Dabo went on to say the following

“Nobody has a lifetime contract in college football,” Swinney. “You’ve gotta show up every week and prove it, earn it. I don’t think we are any different than a lot of places out there. We are very fortunate. We have very good players. DJ is a very talented young man and did a lot of good things last week, especially in the second half. And getting Cade in there was a blessing too. Hopefully, we can get Hunter Johnson some opportunities too. He is another talented player. We have a good situation, but we certainly have competition at every position, which I think makes us a team that has the opportunity to compete for this league.”

DJ Uiagalelei had plenty of expectations entering last season. The big-time recruit played well against Notre Dame in the 2020 season when Trevor Lawrence had to sit due to COVID. It looked like he would be the next in line behind Tahj Boyd, Deshaun Watson, and Trevor Lawrence. But, he struggled all year. He only completed 55% of his passes and had a 9-10 touchdown-to-interception ratio.

Insert Cade Klubnik. Klubnik was one of the top quarterbacks in America last year. The Austin Westlake Chapparal led Westlake to back-to-back 6A Texas State Championships.  Westlake, who is the alma mater of Drew Brees, was coached by former North Texas head coach and Texas high school coaching legend Todd Dodge. You know with that kind of coaching that Klubnik would be prepared.

Klubnik shined in the Spring game. He went 15-23 for 106 yards and a touchdown. Uiagalelei struggled that day and that helped fuel the fire.

That brings us to Clemson’s first game of the year, which was Monday against Georgia Tech. Once again, DJ was pedestrian. So, at the end of the game, Klubnik got a drive. All he did was look in total command of the offense and he was sharp on his throws.

Cade Klubnik rolls out and hits Will Taylor for 20 yards! pic.twitter.com/L2rdnoM36O

Of course, it has led to controversy at Clemson.
@CliffBell77 is one Tiger fan who thinks Klubnik should be the starter

Swinney faced a similar situation in 2018. That year, Kelly Bryant was the incumbent, coming off of a playoff berth. But, after early-season-struggles, Swinney made the change to Lawrence. Lawrence ended up leading Clemson to the national title.

Clemson fans would love if Klubnik could repeat that trajectory.