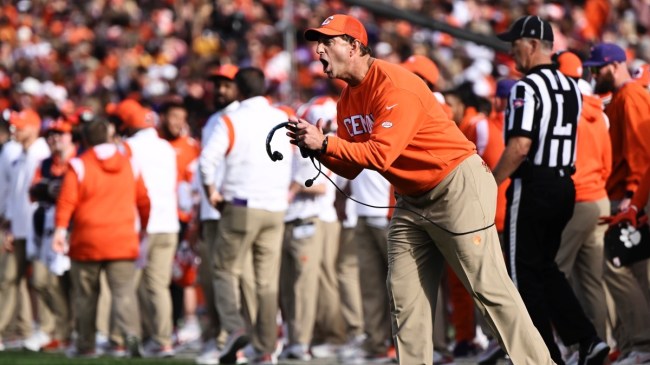 Dabo Swinney is known as one of the best coaches in college football. He’s led the Clemson Tigers to two national titles and the ACC 7 times. They’ve become a national power in his time at Clemson and he is a lock for the College Football Hall of Fame.

He’s also known for being one of the corniest and most disliked figures in the entire sport. His holier-than-thou attitude rubs people the wrong way. And, he famously said he would stop coaching when players started getting paid. Players are getting paid and he’s still coaching.

The Tigers have had a not-so-great season. The record of 10-2 is good. But, the ACC is historically bad this year, and they lost to Notre Dame and South Carolina. Those two teams have a combined eight losses.

After Saturday’s loss to the Gamecocks that knocked Clemson out of playoff contention, Dabo did something certifiably insane.

Dabo Swinney made everyone, including secretaries, watch game film

According to tigernet, Dabo made the entire football building watch film of their loss to South Carolina.

T his past Monday was an afternoon that those who are regularly inside Clemson’s football facility will never forget.
The secretaries were watching the clock, hoping to head home before the late fall darkness descended on Clemson. A myriad grouping of other employees were performing their tasks with no idea what was about to happen.
What happened? Head coach Dabo Swinney gathered everyone inside the facility to watch the replay of Clemson’s 31-30 loss to South Carolina. It wasn’t the fact that Clemson lost – losses happen – it was how it happened to a team that Swinney feels isn’t as talented as his Tigers. It happened because of poor play at several positions and poor execution across the board.
And everybody had to watch it.

This is truly insane behavior. They could’ve been doing actual work.

Clemson plays UNC on Saturday for the ACC title, which is like being the tallest person in a kindergarten classroom.