Dabo Swinney Is Getting Clowned For Mismanaging Clemson’s Quarterbacks 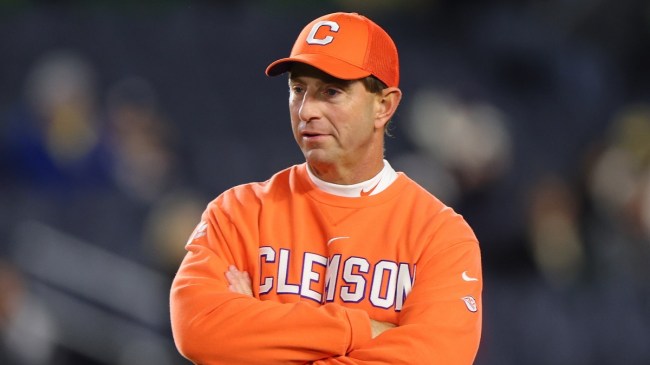 It’s really easy to win in college football when you have an all-time great quarterback. And, in Clemson Head Coach Dabo Swinney’s case, he had two of the great college quarterbacks of the modern era almost back-to-back. Deshaun Watson and Trevor Lawrence manned the position for the Tigers from 2014-2016 and 2018-2020, respectively. And, it paid huge dividends. The two each won a national title and the Tigers went to the College Football Playoff every year from 2015-2020.

Many expected DJ Uiagalelei to be the next in line of great Tiger quarterbacks. After all, he played excellent on the road at Notre Dame as a true freshman and had a five-star pedigree. But, He struggled last year as Clemson lost three times, and has been up and down this year. He was benched for five-star freshman Cade Klubnik against Syracuse in October and Klubnik led the Tigers to a win. But, Dabo Swinney said DJ was still his starter.

Things got hectic this weekend at Notre Dame. After Clemson fell behind 14-0 to the Irish, Dabo decided to make the change to Klubnik late in the 3rd quarter. His offense needed a spark, and the Austin Westlake product had produced one just two weeks ago at Syracuse. But, his first pass was an interception.

Cade Klubnik throws an interception and Notre Dame takes over near the goal line. pic.twitter.com/Oe1KxjY5X5

That’s the only pass he’d throw, as Swinney went right back to Uiagalelei. DJ rewarded Swinney with this terrible piece of quarterbacking.

96-YARD PICK SIX! 🔥@ndfootball's Benjamin Morrison takes his second interception of the second half all the way to the house!

But, Swinney stuck with DJ anyways.

Notre Dame went on to win 35-14 in a game that was not as close as the final score.

Everyone is ragging on Dabo Swinney

A lot of people are going at Dabo on social media. This is deserved, as he’s nothing more than a used car salesman that lucked into two great quarterbacks.

He just is so loyal to DJ, and for what? It’s not as if they’ve ever won big with him. Even in that Notre Dame start his freshman year, Clemson lost the game.

To take DJ out, then yank the true freshman Cade after a one play interception, THEN put DJ back in. It’s embarrassing. It’s an awful look by the coaching staff and it’s embarrassing

dj uiagalelei must have some compromising information on Dabo because there is NO REASON for him to still be their starting quarterback.

How do you keep trotting out DJ if you’re dabo? Kid is terrible.

Clemson gets to play more terrible ACC football teams plus South Carolina the rest of the season, so they will likely win some more games. But, we all know they’re not good and hopefully this knocked them from playoff consideration.