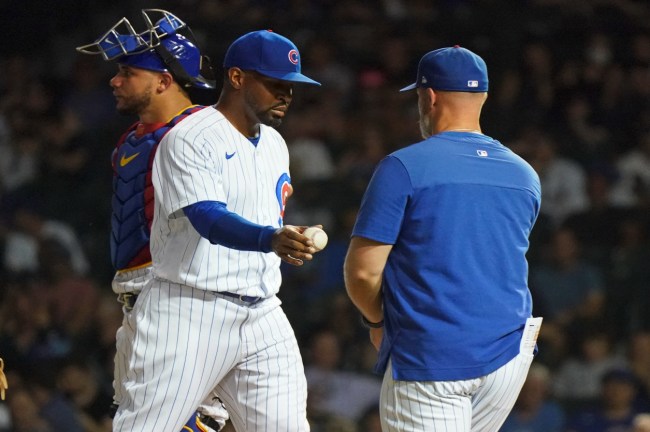 The Chicago Cubs can’t seem to buy a victory right now. They have lost nine straight games and haven’t won since June 4. What’s worse is that they have allowed 61 runs in the last six games, and in three of those games, the opponent has scored 12 or more runs.

The Cubs lost to the San Diego Padres on Tuesday night, 12-5, then lost to the Padres Wednesday, 19-5. Oh, and both of those games were at home.

It has been bad. Really, really bad.

The Cubs’ struggles have been so bad that this statistic is almost too hard to believe.

First baseman Frank Schwindel has pitched in more games (two) in the last 4 days for the Cubs than closer David Robertson (zero).

That kind of says it all as the #Cubs, trailing 17-5, are about to wrap up their season-high 9th straight loss.

That’s right. First baseman Frank Schwindel has pitched more than the team’s closer lately, which should never happen. Remember Schwindel pitching and giving up a home run against the New York Yankees?

Yet, the Cubs aren’t even in last place in the National League Central. Going into Thursday’s matinee against the Padres, the Cincinnati Reds trail Chicago by half a game.

For what it’s worth, the Pittsburgh Pirates are also 1-9 in their past 10 games, although things haven’t been as bad in Pittsburgh.

This was supposed to be a rough year for Chicago, but nobody thought it would be this bad. Who knows, maybe they will turn it around. Or maybe not.