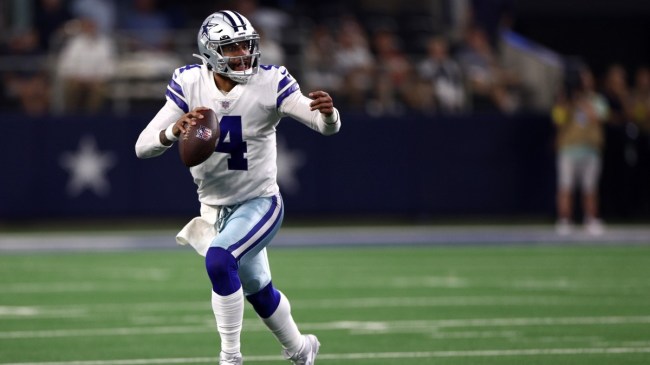 The Dallas Cowboys did not play well Sunday night in their 19-3 loss to the Tampa Bay Buccaneers. It was a game that was only that close because Tom Brady and the Bucs could not score in the red zone early on. Dak Prescott and the offense looked putrid and the defense was overpowered by the Bucs rushing attack.

But, somehow things got worse in the 4th quarter when franchise quarterback Dak Prescott appeared to have injured his throwing hand.

And, later on, Adam Schefter confirmed the news that could derail the Cowboy season before we even get out of the official end of summer.

Cowboys quarterback Dak Prescott will have surgery on his right thumb and now is expected to miss multiple weeks. pic.twitter.com/XizNL4D88W

It’s a devastating blow for Dallas, who won the division last year at 12-5 before losing to San Francisco in the Wild Card Round. Most thought the Cowboys got worse going into this year, and now with a banged-up Dak, their playoff chances look to be slipping away already.

Cooper Rush will take over the starting quarterback job.

With Dak Prescott out multiple weeks, Cooper Rush will now take over as the starting quarterback of the 0-1 Cowboys as they get ready for this week’s game vs. the Bengals.

Naturally, everyone always has opinions about the Cowboys, especially when something bad happens to them.

Things did not look good for the Cowboys tonight even with Prescott. But now, they won’t even have him and who knows how bad things will get in Dallas.

Dallas Cowboys are finished. With a HEALTHY Dak they scored 3 points. Now he’s out for weeks.
Huge opportunity for Carson Wentz, Giants and Philly to take NFC East.

This Cowboy fan thinks that the right play is to tank for a high draft pick. I cannot say that I disagree.

All that being said, it was certainly not the opening week Dallas fans were hoping for.