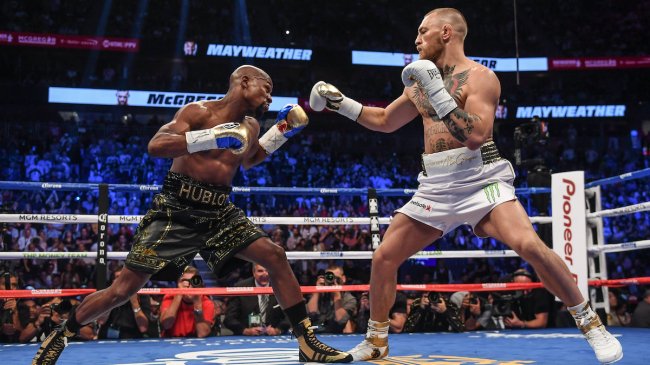 The boxing world received some unexpected news on Wednesday morning with Floyd Mayweather Jr. confirming talks for a rematch against Conor McGregor in 2023.

The two combat sports superstars first clashed in 2017. Mayweather Jr. won via TKO in the 10th round and extended his record to 50-0. He retired from professional boxing shortly thereafter but has kept busy with exhibition bouts.

The new reports of a potential Floyd Mayweather Jr. vs. Conor McGregor 2 come from an exclusive interview the undefeated boxing champion did with Sportmail.

Whether the bout will be professional or an exhibition is not confirmed, but Mayweather Jr. has indicated his preference for the latter. He also threw shade at McGregor by downplaying the Irish UFC fighter’s punching power, even comparing it to that of a YouTuber.

Despite fans buzzing about potentially seeing a rematch for “The Biggest Fight in Combat Sports History,” McGregor appears to have a differing perspective on the reports.

The former UFC featherweight and lightweight double champ posted an Instagram picture of himself landing an uppercut on Mayweather Jr., captioned with “#notinterested.”

McGregor hasn’t fought in over a year since breaking his leg in the fight against Dustin Poirier at UFC 264. The timeline for his return remains unclear. It appears another venture into boxing won’t delay it though.

Mayweather Jr. still has two exhibition bouts scheduled for this year. The first is happening this weekend against Japanese mixed martial artist Mikuru Asakura. The second is scheduled against British YouTuber Deji Olatunji for November.

While Mayweather Jr. may claim that a rematch is in the works, McGregor’s comments seem to contradict. Perhaps ensuring the bout is a professional fight (and not an exhibition) might help convince the former UFC champion to change his mind.

Even then, this rematch is unlikely to match the hype of the first bout. However, it would still draw in a massive audience and significant paychecks for the fighters. Whether that’s enough to get McGregor on board is uncertain.