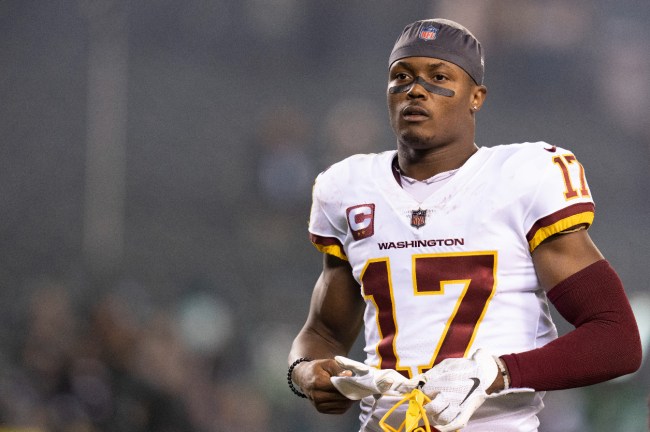 The Washington Commanders added Carson Wentz at quarterback this offseason. However, it looks like Wentz might not have his number one option on offense.

With mandatory minicamp beginning on Monday, wide receiver Terry McLaurin was absent as he continues to seek a new, long-term contract extension.

#Commanders WR Terry McLaurin won't be at minicamp, source confirms. The two sides will continue discussions to attempt to work out a long-term deal. https://t.co/N7c4AlAfLF

McLaurin wants a new deal, and the Commanders have not budged up to this point. As such, McLaurin isn’t showing up, and he could end up being fined for missing the minicamp — although the amount is just chump change for McLaurin.

#Commanders WR Terry McLaurin won't be at minicamp, source confirms. The two sides will continue discussions to attempt to work out a long-term deal. https://t.co/N7c4AlAfLF

On the surface, this isn’t very surprising. McLaurin wants a new deal and the Commanders haven’t given him one. We have seen this time and time again with various NFL stars.

Is McLaurin worthy of top-10 wide receiver money? He has posted 1,000 yards twice in three seasons and put together a 919-yard campaign in his first season in the NFL.

McLaurin has 16 touchdowns in three seasons and has missed just three games since entering the NFL. The numbers are impressive, but one can’t help but think that Christian Kirk’s outrageous free agency deal has shifted the WR market in a big way — and McLaurin is looking to hop on board the pay train in Washington.

Let’s see what happens with McLaurin.