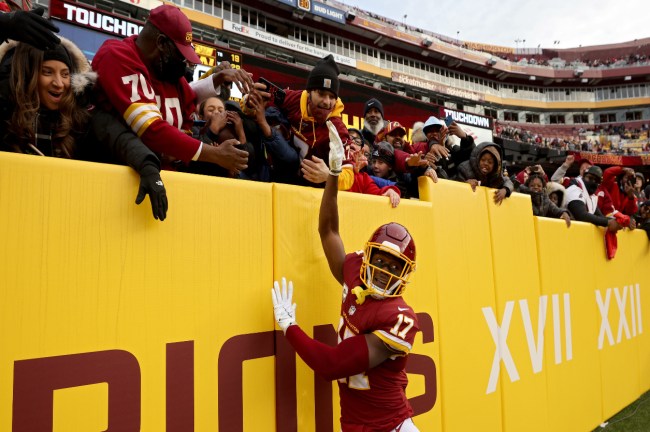 The Washington Commanders officially have their WR1 in town for the next four seasons, at least. After both sides went back and forth to work out a new deal, the Commanders and Terry McLaurin agreed to a new contract that makes him one of the highest-paid wide receivers in the NFL and includes $71 million in new money, according to Adam Schefter of ESPN.

That’s right, McLaurin is now among the NFL’s top-five-paid wide receivers in the NFL. Here is the list, per NBC Sports.

That is terrific company for McLaurin to be in, even though he isn’t — at least not yet — on the same pedigree as the players on that list.

Nonetheless, new Commanders QB Carson Wentz has his WR1 locked in and that should bring a smile to his face as he tries to turn around his career in yet another uniform.

Now, the signing bonus is another part of the contract, and who knows what the Commanders are thinking.

The new three-year extension for Terry McLaurin includes a $28 million signing bonus, the largest given to any wide receiver, and also has 76.4 percent of the new money in deal guaranteed. The deal contractually ties the 26-year-old McLaurin to Washington through the 2025 season.

So, a $28 million signing bonus — the largest ever given to a WR. More than that, nearly 80% of his deal is guaranteed, so the Commanders went all-out to ensure that McLaurin is in the nation’s capital (or somewhere else if they do move to a new location, as previously reported).

After McLaurin skipped minicamps and had everybody buzzing, the Commanders knew they needed to push all of their chips in. And they did.