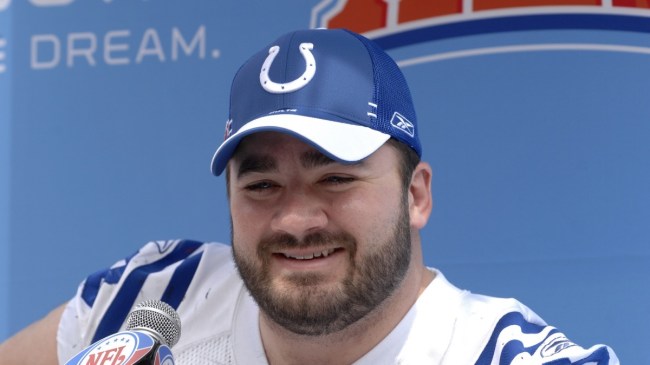 It’s been a whirlwind week for the Indianapolis Colts. Following a 26-3 demolition by the New England Patriots on Sunday, the franchise decided to part ways with head coach Frank Reich. And while that was relatively expected, what happened after they fired him had people talking.

There were many qualified candidates they could hire. They even have former NFL head coach Gus Bradley on staff. But, they went with a complete shocker. They hired former Colts’ All-Pro center Jeff Saturday out of nowhere to be their next head coach. Plenty around the league were furious with the hire. Most think he is not qualified whatsoever, as his only coaching experience is in high school, with middling results.

But, Saturday took a huge step towards changing his public perception at a press conference on Wednesday.

They say you only get one first impression, and Wednesday was the former center’s chance. He knocked it out of the park.

Here is the statement, in part.

I’m completely comfortable and who I am as a man, bro. I know I can lead men. I know I know the game of football and I’m passionate about it. I have no fear about ‘are you as qualified as somebody else.’ Bro, I spent 14 years in a locker room. I went to the playoffs 12 times. I got five dudes in the Hall of Fame that I played with. You don’t think I’ve seen greatness?You don’t think I’ve seen how people prepare how they coach how they GM how they work? I’ve won Super Bowls, been to two, like, here’s the deal, man. None of us are promised a good job. I may be terrible at this and after eight games, I’ll ‘say God bless you. I am no good.’ I may be really good and I got no idea but I dang sure ain’t gonna back down. I can tell you that.

Wow, quite the statement there by the new head coach. Of course, it means very little in this league, as you have to go out and win. But, it certainly seems like he has some fire.

The Colts will take on the Raiders this Sunday. Their season is far from over at 3-5-1.