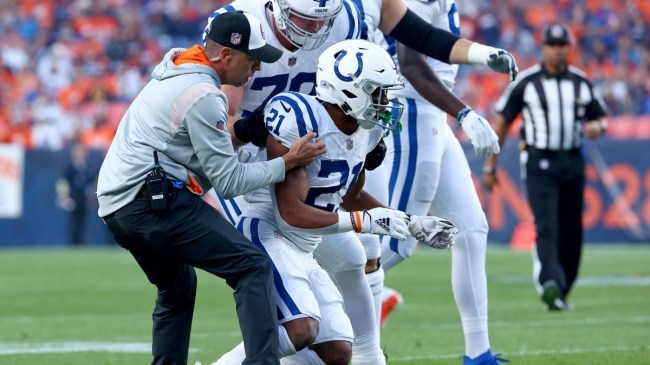 It’s been a rough few weeks for NFL head injuries. Tua Tagovailoa has famously suffered two very scary head injuries. A lot of scrutiny has come on the league regarding their procedures around head injuries and player who look like they’re stumbling around.

Of course, it had to happen again, as another nationally televised game had a player look visibly shaken up.

In the first quarter of Thursday night’s game between the Indianapolis Colts and Denver Broncos, he got hit hard and was seen stumbling.

Frightening scene with Nyheim Hines after taking a big hitpic.twitter.com/dUA2weN470

Stumbling around like that is never a good thing.

Here’s a good look at the hit.

Man this is scary stuff. Nyheim Hines not right after a big hit on the first drive. pic.twitter.com/nPFYse16wX


Credit to this Denver Broncos staffer who instantly saw Hines not looking quite right and ran out to stabilize him.

Shout out to this Broncos staffer for immediately recognizing Hines’ instability and running out to help him pic.twitter.com/rqjxjVXqN9

This comes at an inpopportune time for the NFL as it seems like for the first time in years they have let their concussion protocols back into the news in a negative way. Having another player stubmling around, even if the situation was handled correctly, is just poor timing.

The running back has been ruled out for the rest of the game.

Nyheim Hines has been ruled out of Colts-Broncos due to NFL concussion protocol, per @AdamSchefter. pic.twitter.com/DyiXrh6NEi

People are discussing the injury.

It does seem like there have been a lot of these happening lately. Maybe that’s just because we are looking for it, but I certainly notice it more.

Another significant concussion. Haven’t seen this many NFL players getting up like they’ve been in a boxing ring. Sad. Hope he’s okay. “Hines needs some help just to remain upright.”~Al Michaels #TNFonPrime pic.twitter.com/VT8e1AaHHn

Of course, people had to take shots at the Miami Dolphins and their handling of Tua Tagovailoa.

Lots of people had bets on Hines, too. Those people weren’t happy. But, Draftkings announced they will be refunding Hines-involved prop bets.

Me: Bets on Nyheim Hines

Result: Nyheim Hines gets hurt before I can turn the game on

We will be refunding all losing singles on Nyheim Hines and all SGP/SGPx bets where Hines is the only losing selection.

Bets credited inside 24 hours and refunded in free bets.