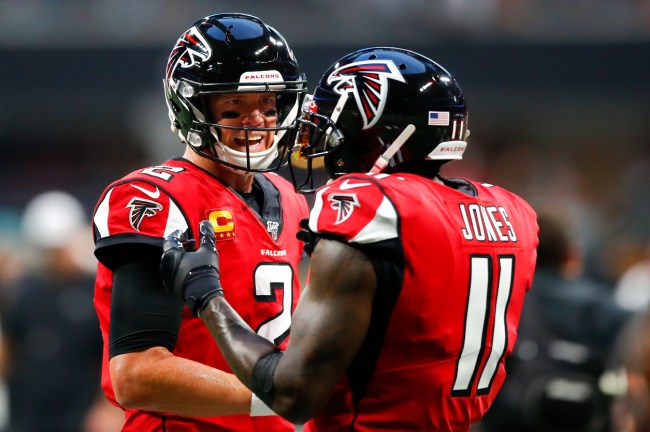 The Indianapolis Colts had a busy offseason. They traded away Carson Wentz to the Washington Commanders. Then, they acquired Matt Ryan from the Atlanta Falcons.

The Colts drafted Alec Pierce out of Cincinnati, and the offense in Indy will look much different with Ryan running the show instead of Wentz. For the past few weeks, rumors have swirled about Julio Jones potentially pairing back up with Ryan. The former Falcons QB-WR duo parted ways when Julio Jones was traded to the Tennessee Titans.

Unfortunately, Jones struggled in Tennessee and is now a free agent. So, the Ryan-Jones reunion is an obvious thought for many, and the Colts’ need for some added depth in the wide receiver room is another reason.

But, we can kiss those talks goodbye for now, at least according to Colts GM Chris Ballard.

#Colts GM Chris Ballard told reporters they have not had any discussions about signing Julio Jones and reuniting him with Matt Ryan.

Bringing back TY Hilton is still “in the mix.”

Ballard didn’t shut it down altogether, but for the time being, no discussions have surfaced. Moreover, the Colts could bring back TY Hilton; if that happens, they don’t have room in the WR group.

Parris Campbell is expected to take a step forward, and Michael Pittman Jr. broke out in his sophomore campaign and should do even better with Ryan aboard. While Jones isn’t the player he once was, he had his best seasons with Matt Ryan throwing him the football.

The Colts could change their minds on the Julio front, and as of now, there aren’t many suitors for the veteran wide receiver. Those wanting a Matt Ryan-Julio Jones reunion might not want to get their hopes up.