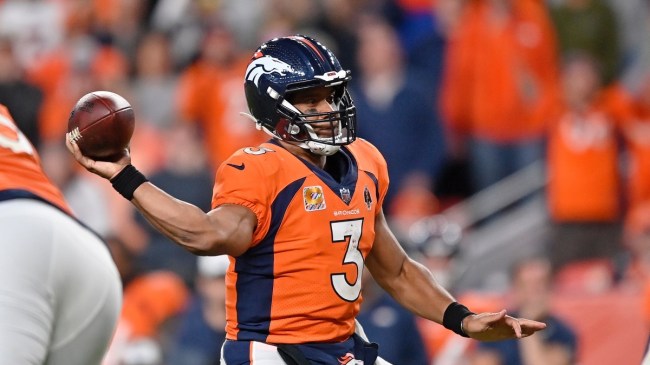 It’s hard to get Americans to complain about football. After all, it’s our most popular sport here in the USA. Preseason NFL games routinely outdraw regular season games from other sports. Thursday night’s Broncos-Colts game may have some people never watching again.

But, Thursday night’s game was as bad as it gets for NFL football. It was a putrid display of football that had fans of both teams as well as the announcers languishing.

The Colts beat the Broncos 12-9 in a terrible game

First off, there were no touchdowns scored in this game, just seven field goals. Denver never trailed until overtime and looked to have a chance to put the game away late, but Russell Wilson, who has been atrocious as a Bronco, threw a terrible interception.

This came off the heels of another horrible interception in the 4th quarter by Wilson.

Those clips are indicative of how poorly the game was played all around.

The Colts would drive down after the late Wilson interception and then tie the game on a field goal with 05 left. They got the ball first in overtime and drove down for yet another field goal.

Not to worry, as the Broncos looked to be in good shape with a drive deep into Colts territory on their overtime possession. Facing a 4th and 1, coach Nathaniel Hackett decided to go for it and this was the result.

And the @Colts walk away with the W in OT. #INDvsDEN on Prime Video
Also available on NFL+ https://t.co/qcjXnKGOp7 pic.twitter.com/rApHGVBy70

This is an impossibly bad play for Russell Wilson. KJ Hamler has a walk-in touchdown at the top of the screen and he threw way late to the receiver he ended up targeting.

Of course, that route that Hamlin ran to get open seemed very similar to the route Ricardo Lockette ran when Malcolm Butler famously intercepted Wilson in the Super Bowl.

Everyone agreed this was terrible football.

Nobody was defending this game and the memes were out in full force.

The game was so bad that a local television station in Denver full-out apologized for how bad it was.

To remind you, Amazon is playing a billion dollars a year to televise these games

Jeff Bezos really paid top dollar to have these terrible games on Amazon Prime. This is the worst game ever.

Poor Al Michaels and Kirk Herbstreit, who had to be professional in the midst of insulting football.

Al Michaels: "Sometimes a game could be so bad, it's almost good. You know what I mean?"

Fans made presumably a lot of money to watch this game, and despite it being played in Mountain time, two hours earlier than the east coast, fans had enough.

Don’t worry folks. Next week’s game is between the Chicago Bears and Washington Commanders. How exciting.