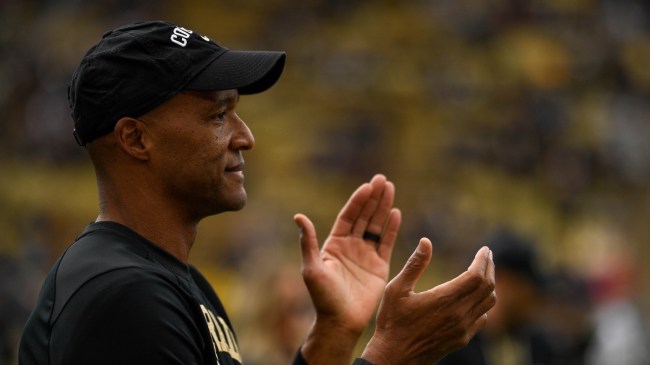 The Colorado football program was once a proud program. It has a modern-day national title in 1990, dominated the early 90’s in the Big Eight, and should’ve played for a national title in 2001 only to be denied by the BCS computers. But, things have definitely changed. The program has never been the same since it became embroiled in a scandal that erupted in 2001 and carried on into 2003.

But, after years of floundering sandwiched around one Pac-12 Championship Game appearance in 2016, Colorado Hired Karl Dorrell before the 2020 season. The former UCLA coach went 4-2 in the COVID season but is 4-11 since and 0-3 this year. The Buffaloes have been blown out in all three games this year and were embarrassed by Minnesota 49-7 on Saturday.

Dorrell gets the dreaded vote of confidence

Naturally, there are questions about Dorrell’s job security, Colorado seems to be looking to leave the PAC 12. But, poor performance from their football team is not helping their cause for the Big Ten invite they want. Pressure is on Colorado’s administration and Athletic Director Rick George to right the ship. He made a statement the day after the Minnesota loss that some could see as bad for Dorrell.

That is the dreaded vote of confidence. The fact they even have to make a statement is bad for Dorrell’s future in Boulder.

Buff fans are getting impatient.

"I wasn't expecting that type of performance."

Karl Dorrell should be able to be fired for cause. No buyout. Let him sue and settle for less than the 8 million.

This is quite the damning indictment by this fan.

Karl Dorrell looks like he doesn’t even know he’s at a football game. #CUBuffs

– The damage to the program if Dorrell continues as head coach

I tend to agree with @KirkMucker. You cannot wait around in this day and age and you have to make the move now.

If Karl Dorrell is allowed to continue to coach this team it doesn’t hurt the team for just this year. It destroys recruiting for the future as well. Rip the bandaid off and get rid of this clown now!! It’s what’s best for the future of CU football!

On the bright side, the only way is up in Boulder.