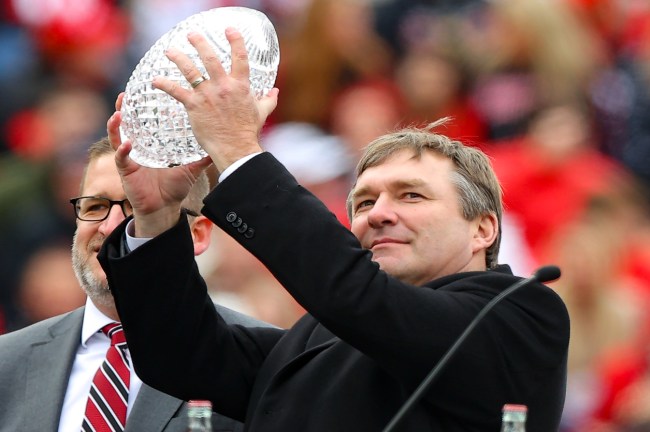 The domino effect is happening everywhere, and n to just for the players. Georgia Bulldogs head coach Kirby Smart, who is fresh off a national title, just cashed in on a massive deal. According to Chris Low of ESPN, Smart locked in a 10-year contract worth $112.5 million.

Sources tell ESPN that @GeorgiaFootball coach Kirby Smart has agreed to a new 10-year deal worth a total of $112.5 million, making him one of the highest paid coaches in college football.

Smart will now become one of the highest-paid coaches in college football, along with Lincoln Riley and Nick Saban. Smart’s deal will begin at $10 million a year and grow to $12 million, which would then make him the highest-paid on an annual basis.

Kirby Smart, who led @GeorgiaFootball to a national title last year, will make more than $10 million the first year of the new deal and it will go up over $12 million the final year.

Smart is now tied to Athens until 2031, and there might be a lot more College Football Playoff appearances over the next decade.

Georgia fans are loving this development, while other fans aren’t entirely happy about Smart’s massive contract.

Easily worth the money here. https://t.co/QqE2laJ2A0

As expected, Kirby getting PAID after winning it all last year https://t.co/JVEua2XAvE

For what it’s worth, Georgia comes in with the second-highest odds to win the 2023 National Championship, and it won’t be easy for the Bulldogs to repeat.

Kirby Smart almost quit coaching, won a title, and now secured a massive, $112-million bag. What a turnaround and a well-deserved deal for the Bulldogs headman. In his time with the Bulldogs, he has compiled an impressive 66-15 record in the SEC. And those victories won’t be dwindling anytime soon.