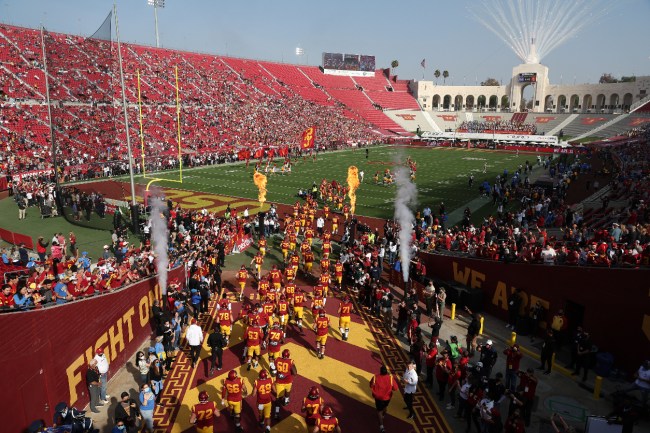 With NBA free agency a couple of hours away, the spotlight quickly shifted to college sports and the world of college football, specifically.

Jon Wilner of The Mercury News dropped an absolute bombshell report stating that BOTH USC and UCLA are eyeing a move to the Big Ten.

Source: USC and UCLA are planning to leave for the Big Ten as early as 2024. Move *has not been finalized* at the highest levels of power.

This report would send shockwaves throughout the college football world and drastically change the Pac-12.

This massive report is sending everybody into a wild frenzy.

All of our hosts, looking at their show prep for the rest of the day… https://t.co/IULYU00FNG pic.twitter.com/dnrkPuFyAE

Welcome to the best conference in college football https://t.co/jCy70QmdTH

Source tells me that there is a lot of truth to @wilnerhotline report about USC and UCLA in discussions to leave for the Big Ten. My understanding is USC and UCLA reached out to the Big Ten.. certain legal parameters and bylaws need to be followed for obviously legal reasons. https://t.co/2NSDv8YtWA

In 2024 the SEC and Big Ten will likely have revenues exceeding many pro sports.
They many not be professional, but they will certainly not be amateur. https://t.co/tj5hYNKAIz

USC and UCLA really are coming to Big Ten to play in weather like this 💀 pic.twitter.com/ZnBkNpAqv0

USC and UCLA are in negotiations to join the Big Ten conference, a source tells @SINow, confirming @wilnerhotline's report.

A stunning but not all that surprising move: Teams are jockeying to get into the top two leagues of FBS – the SEC and B1G.

USC and UCLA coming to show Ohio State and Michigan how to wear their home uniforms in the rivalry game every year. The Big Ten will be better for it.

The Pac-12: wow guys, glad all that conference realignment is over

USC and UCLA on their way to go play Rutgers:pic.twitter.com/qQgGKLws3U

It's impossible to overstate how USC and UCLA joining the Big Ten will change college sports forever.

From a financial standpoint, the B1G will be untouchable. The conference will own the four biggest TV markets in the country.

This massive move will be interesting, especially for football and basketball. UCLA and USC playing regular-season games against programs such as Michigan, Michigan State, Purdue, Ohio State, and so on makes for must-watch television.

The financial aspects are surely going to be overwhelming, and Nicole Auerbach of The Athletic mentions the potential forming of some megaconferences.

Just got off the phone with someone who believes this eventually leads to two megaconferences — the Big Ten and SEC — with 20 or more members apiece.

As if this offseason wasn’t crazy enough in college football, this is another piece of the puzzle.

And, surely, this won’t be the last domino to fall.