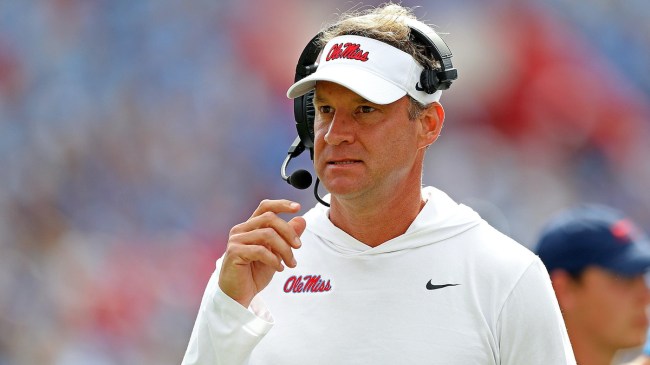 Lane Kiffin is sure having a bit of fun while the rumors surrounding his head coaching future continue to swirl.

The Ole Miss head coach has impressed over the last three years and even led the Rebels to their best regular season record in program history in 2021. So it’s understandable that Kiffin is reportedly Auburn’s top target for the 2023 season and has been linked to the job ever since the Tigers fired Byran Harsin earlier this season.

On Monday, news broke that made it appear the move was imminent. Jon Sokoloff of WCBI News reported that Kiffin would step down following the Egg Bowl on Thursday. Apparently, the update was news to the Ole Miss head coach as well.

Kiffin shut down the report via Twitter and even fired shots at Sokoloff’s sources with no shortage of emojis. The Rebels’ head coach hasn’t given any confirmation about his future plans and previously stated that a decision wouldn’t come until after the season.

Lane Kiffin Trolls Reporter With His Own ‘Report’

It seems Kiffin wasn’t satisfied with simply denying the plans to leave Ole Miss though. So he took it a step further by creating a word-for-word copy of the report. However, he tailored it specifically for Sokoloff in a hilarious clap back.

Even WLOX anchor Hugh Keeton got in on the jokes and gave his own reaction to the ‘breaking news’. To which Kiffin responded, “Fake news.”

With Ole Miss reportedly prepared to make Kiffin the highest-paid coach in program history, perhaps it will be enough to keep him in Oxford. At least for now, he has shut down the Auburn rumors.

The Rebels’ regular season will come to an end following Thursday’s Egg Bowl against Mississippi State. While Kiffin has denied the plans to leave Ole Miss on Friday, confirmation regarding his future could come soon after.

Until that decision is announced, his name will remain in the conversation for the Auburn job. However, reporters will likely be more cautious before breaking any more news now.