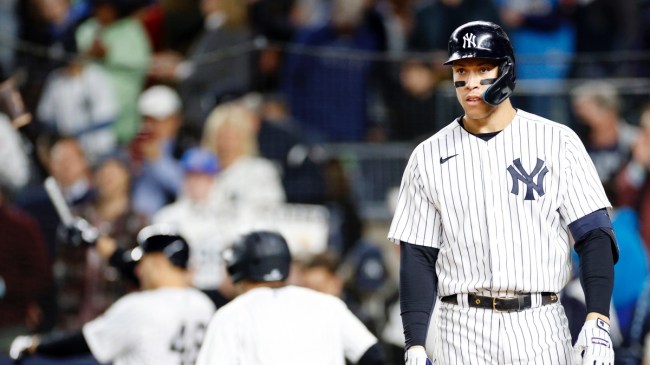 Last weekend, college football fans were dismayed when ESPN and ABC cut into games for Aaron Judge’s record pursuit. Judge, who was sitting on 60 home runs at the time and has since hit his 61st, is trying to break Roger Maris’s American League and Yankees record of 61 home runs set in 1961.

That’s all well and great, but fans were not appreciative of the cut-ins last week. They wanted to watch the football games they were on. ESPN hasn’t learned their lesson, apparently, and they are doing it again already this week for Friday Night College Football.

Fast forward to week 5’s Friday night matchup between Houston and Tulane, and ESPN is back at it again.

AND AARON JUDGE HAS DONE IT!! HE STRUCK OUT IN THE SPLIT SCREEN AGAIN!!

This tweet is certainly as funny as it gets. The vast majority of people are watching Houston-Tulane because they have money on the game.

Naturally, many fans do not want the cut-ins.

People are already hoping that Judge hits his 62nd on Friday night so it doesn’t happen on Saturday.

Please just hit tonight so we don't have to deal with this tomorrow.

But, ESPN has already announced the cut-ins are happening again on Saturday (assuming that he does not hit a home run Friday). Fans of teams that play tomorrow, like Penn State and Northwestern, are already prepared for the worst.

ESPN will cut its coverage of Penn State vs Northwestern tomorrow when Aaron Judge is up to bat in the Yankees Game… thoughts? pic.twitter.com/2b4tElj2aP

And by the worst, I mean they are complaining.

And, as a Mets fan and a Penn State grad, I agree that it’s just another reason to hate the team in Bronx.

Just another reason to hate the Yankees

Hopefully Judge gets it done Friday, so ESPN doesn’t ruin a weekend of college football with unnecessary cut-ins.