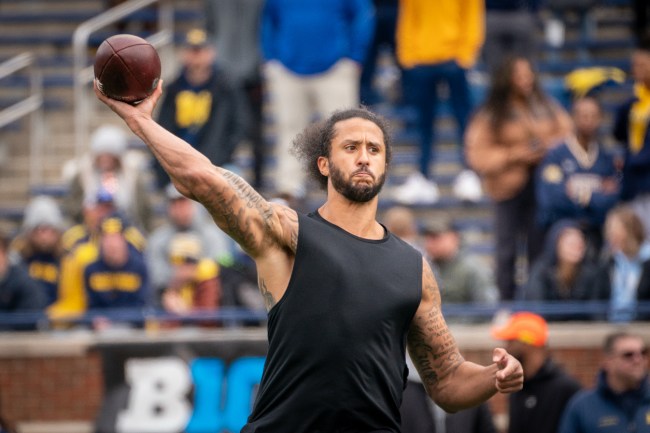 Just when we thought Colin Kaepernick was done in the NFL. Well, think again.

The former San Francisco 49ers QB has received a workout from an NFL team, and no, it isn’t Pete Carroll and the Seattle Seahawks. Instead, it is Josh McDaniels and the Las Vegas Raiders.

This is a massive step in the right direction for Kaepernick, who has not received any workout with an NFL team for years. But, last month, he threw for everybody at halftime of the Michigan Spring Game as head coach Jim Harbaugh publicly endorse Kaepernick.

So, at the end of May, why are the Raiders bringing in Kaepernick for this opportunity?

That is the reason why. Well, at least that’s one reason why the Raiders feel comfortable giving it a shot.

One connection: #Raiders OC Mick Lombardi spent the early portion of his career as an assistant with the #49ers and their QB… Colin Kaepernick. https://t.co/M2wDnAA6Kr

Now it makes more sense than it did initially when it was reported.

Kaepernick has not played a down in the NFL since 2016, and surely there are plenty of other options on the market.

#Raiders owner Mark Davis last month: “I believe in Colin Kaepernick. He deserves every chance in the world to become a quarterback in the National Football League. I still stand by it. If our coaches and general manager want to bring him in, I would welcome him with open arms."

For the time being, the Raiders have Derek Carr far and away the starter. After Carr, the depth chart looks a bit ugly. Jarrett Stidham, Nick Mullens, and rookie Chase Garbers are the other QBs on the roster, and neither of them are entirely promising.

Maybe Kaepernick has a realistic shot to make the roster and land the backup QB job. After everything the Raiders went through last season, it might be a head-scratcher, but it has been years since Kaepernick has appeared in the NFL and a lot of Raiders personnel are backing him.