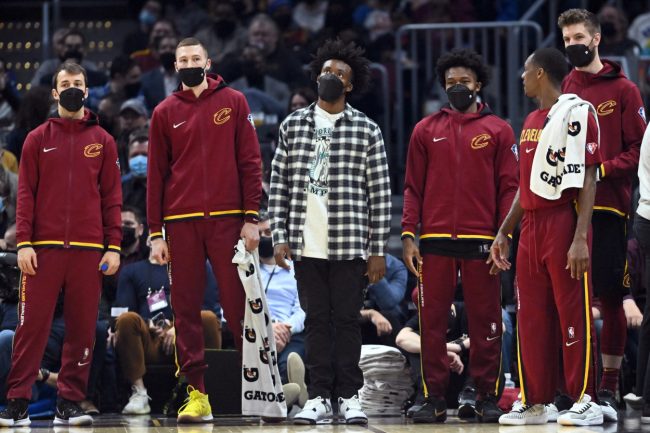 The Cleveland Cavaliers are building one of the most exciting young teams in the NBA. Led by guards Darius Garland and Collin Sexton, as well as 2021-22 NBA Rookie of the Year runner-up Evan Mobley, the Cavs could well be a contender for years to come.

So it’s only right that Cleveland designed new jerseys for a new generation of the franchise. The only problem? The new jerseys are ridiculously bland. And the team is getting fried over them.

The Cavs revealed three new sets of uniforms: association, icon and statement. The white association jerseys at least seem to feature some sort of creativity. But the black statement uniforms do anything but make statement and the maroon icon jerseys look like something you’d wear during practice.

Cleveland went 44-38 last season despite Sexton missing a significant amount of time, including the entire season from November on after surgery on a torn meniscus. He and Garland represent one of the best young backcourts in the NBA and Cavs fans deserve something to be excited about. But these new uniforms are decidedly not that. Fans of the team showed their displeasure immediately on Twitter after the jerseys were unveiled.

These look like practice or summer league jerseys https://t.co/7Xm3IQcv7D pic.twitter.com/dDrBNErb1g

Laziest jerseys I may have ever seen my god https://t.co/XnYN4jaD3Q

Every NBA team should have to ask themselves “is our uniform more fun than the most fun MLB uniform” and if the answer is no they should start over https://t.co/r4DF8DUZ1D

I am so disappointed…. Y'all had ONE JOB!

Anyone saying these practice jerseys are better than our previous is straight up lying.

Though not all Cavs hated the designs. Some were all-in on the new looks.

Cleanest jerseys in the NBA 🔥 https://t.co/szA4eNh5Yu

Clean. Understated. No grandstanding. A lot like the @cavs themselves.

Huge fan. Clean cut. When you see these on the floor, you’ll love em too. Gonna look so damn smooth. https://t.co/RvcbylJT7v

The minimalist trends for design in sports has continued to grow in recent years. But fans aren’t really overly excited about the changes. In fact, teams have repeatedly been clowned by fans for ruining once-great looks. The previous Cavs jerseys were nothing special, but this new look is flat out boring.