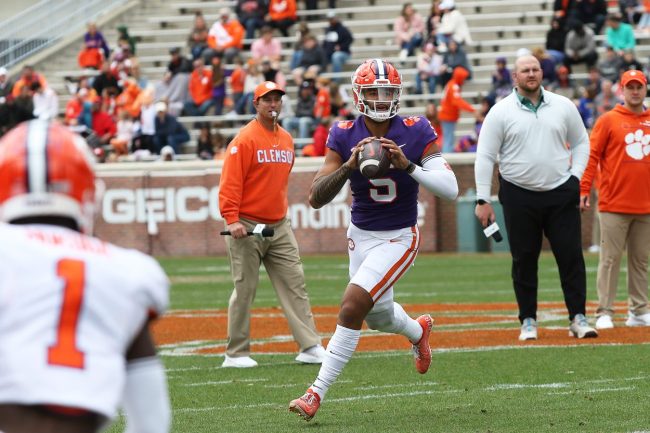 Quick, without looking, what was the Clemson Tigers’ record in 2021?

Odds are, you probably didn’t answer 10-3. But that’s exactly what Dabo Swinney’s team went a year ago, including six straight victories to end the season and a 14th-place finish in the season-ending AP Poll.

Not bad for a team that many believed had a disaster season.

The Tigers are back on track entering the 2022 season. They’re the favorites in the ACC according to to DraftKings Sportsbook and ranked fourth in the initial AP Top 25. Third-year QB DJ Uiagalelei reportedly lost 30 pounds in the offseason, dropping from 265 to 235.

That plus a slew of returning starters has Clemson positioned to return not only back to the top of the ACC, but also potentially the College Football Playoff.

Clemson Is Answering The Important Question As The New Season Nears

The Tigers begin the 2022 season on Sept. 5 when they travel to Georgia Tech for an ACC clash. Before they do that, however, they’re having a bit of fun.

The question may seem ridiculous at first, but it’s an important answer to know. Anybody who goes sock-shoe-sock-shoe is clearly a serial killer. It’s probably not great to have serial killers on teams with nation title aspirations.

Most of the players had the correct answer, though kicker Robert Gunn III and running back Keith Adams Jr. are now officially on a watch list.

What a career for Shaquem Griffin. https://t.co/VLFlhbO6Hg

At least Dabo Swinney’s job just got a little bit easier when it comes to roster cuts.