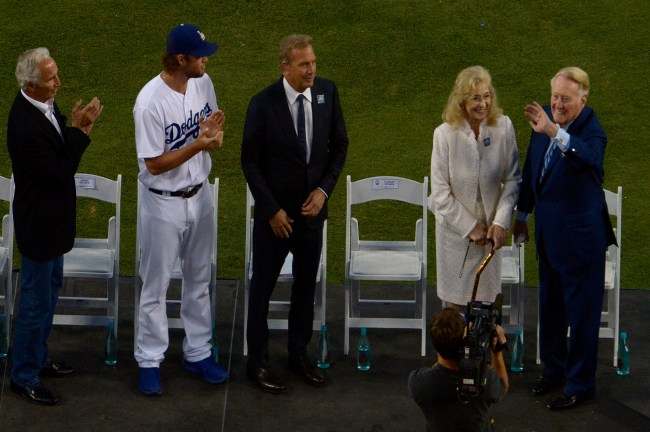 Baseball fans everywhere are mourning the passing of legendary broadcaster Vin Scully. The longtime voice of the Los Angeles Dodgers passed away on Tuesday at the age of 94.

Scully was a part of a long list of historical games, and he even called some football games as well. We relived some of the best clips from Scully’s career, and listening to those gives you such nostalgia that it’s hard to imagine Scully not calling games anymore.

Dodgers veteran and ace Clayton Kershaw spoke about the passing of Scully, and he gave a perfect description of the greatest broadcaster of all-time (h/t Bill Plunkett of The Orange County Register).

“He was the best that ever was. Just when you think about the Dodgers, there’s a lot of history here and there are a lot of people that have come through. It’s just a storied franchise all the way around. But it almost starts with Vin.”

There have been a ton of historical players, coaches, and the like to walk the graces of the Dodgers clubhouse. Yet, according to Kershaw, Scully was “the best that ever was.”

Remember Jackie Robinson? He revolutionized the game of baseball, and Clayton Kershaw admits Scully is right up there with Jackie.

“He’s right there with Jackie. Obviously it’s a whole different thing. But just as far the history of our organization, Vin has been through it all. Just such a special man. … Just a tremendous life and legacy that he led and thankful I got to know him.”

For decades and decades, Vin Scully was the voice of the Dodgers. He will be remembered forever as one of the best to do it.