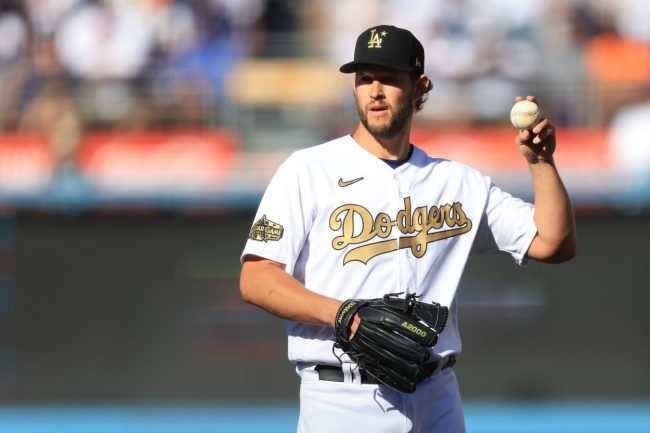 The MLB All-Star Game on Tuesday night was always going to be special for Los Angeles Dodgers ace Clayton Kershaw.

Sure, Kershaw was making his ninth All-Star Game appearance. He’s a three-time Cy Young Award winner and a lock to end up in Cooperstown. But it was Kershaw’s first time starting the mid-summer classic. And he was getting to do it in front of his home fans in Dodger Stadium.

Kershaw had a strong showing, allowing a leadoff hit before picking off Shohei Ohtani as part of a 1-2-3 first inning. But it was what happened after the game ended that will likely end up sticking with him forever.

The veteran left-hander was finishing his postgame press conference duties when he got up to leave. But instead, he was quickly called back and introduced to 10-year-old Blake Grice. What happened next will bring a tear to anyone’s eye.

Clayton Kershaw thought his press conference was over when he was surprised by a 10-year-old.

The child’s grandfather made a bucket list. On that list: meet Clayton Kershaw. That never happened. He died of cancer. But today Blake Grice met Kershaw. He feels his pappy with him. pic.twitter.com/K5KGcd5ozO

Grice informed Kershaw that his grandfather, who recently passed away, had a bucket list. On that list was to meet Kershaw. Unfortunately, Grice’s grandfather never got the chance. So the 10-year-old decided to see out the mission for him.

Kershaw was visibly humbled by the interaction and all things considered, Grice did a tremendous job of keeping himself together given all the emotion. Everyone else in the press room, however, had a much tougher time of keeping from crying.

Baseball Twitter quickly got word of the meeting and it swept across the internet.

There must have been onions around when I saw this. https://t.co/Ztmf6hYN7V

There’s no crying in baseball. Except when there is. https://t.co/bY0sK5Welh

I'm not crying, you're crying. https://t.co/aEoJW13rrw