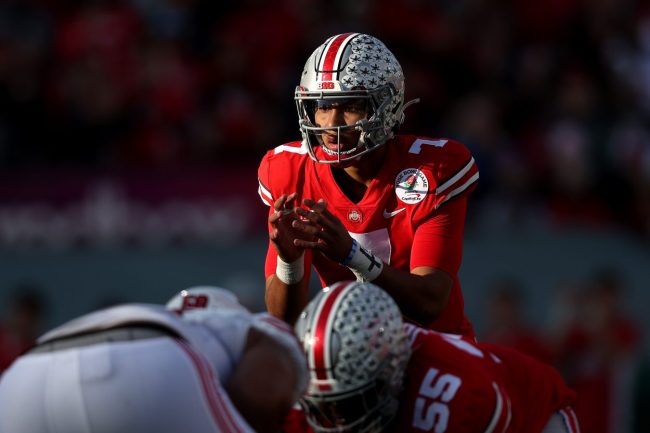 Ohio State quarterback CJ Stroud is one of the best players in all of college football headed into the 2022 season. The Buckeyes signal caller threw for a jaw-dropping 4,435 yards and 44 touchdowns as a redshirt freshman. He also set school and Rose Bowl records with 573 yards and six touchdowns in a 48-45 victory over Utah to cap the season.

Stroud’s performance hasn’t gone unnoticed. He’s currently the favorite to win the 2022 Heisman Trophy according DraftKings Sportsbook at +220. The star QB has also signed some unique NIL deals that have landed him in some impressive rides.

But now Stroud is speaking out in search of more compensation, and he may have a valid point.

The redshirt sophomore saw the enormous figures the Big Ten is set to rake in via new TV deals, and now he’s wondering if the players can get a piece of the pie.

Joey Kaufman of The Columbus Dispatch reports that Stroud has expressed his belief that players should receive a portion of the more than $7 billion in revenue.

“I definitely think it should be shared,” Stroud said, “but if not, at the end of the day, we have the NIL space. We can do it that way. The new college world is turning around, and I’m here for it.”

“This game is amazing, especially the college atmosphere, because it does have amateurism to it,” Stroud said. “That’s definitely a plus. But at the same time, I’m not 100% sure what our tuition is, but I’m sure it’s not the worth of what we’re actually worth. My mom has always told me to know my worth.”

On3Sports values Stroud at $2.5 million on the NIL marketplace. That ranks second behind only Alabama QB and 2021 Heisman Trophy winner Bryce Young among college football players.

Bronny James, the son of LeBron James, leads the way among all athletes at $7.3 million. While Texas commit Arch Manning checks in at No. 3 at $3.4 million.

Stroud and the Buckeyes begin the season with a marquee matchup against Notre Dame on Sept. 3.