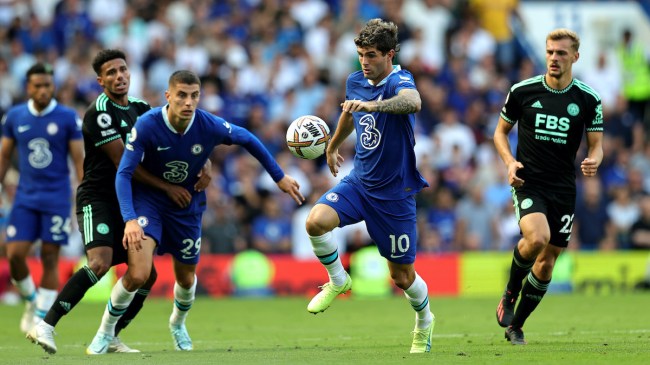 The Premier League’s summer transfer window closes this Thursday and it’s looking like USMNT star Christian Pulisic will be staying with the Blues for now.

The American winger has struggled to retain a starting spot since joining Chelsea FC in 2019. The club then brought in several attacking talents for the 2020-21 season, including Timo Werner, Kai Havertz, and Hakim Ziyech, creating even more competition within the squad.

Despite new American ownership under Todd Boehly, the 2022-23 season hasn’t been off to a great start. So much so that Pulisic is hoping for a transfer, but the club has seemingly refused to consider it.

"They are blocking any deals and holding him against his wishes." 😳

Christian Pulisic wants to leave Chelsea, either on loan or permanent deal, but the club is not in negotiations with clubs for his services according to @PaulTenorio. pic.twitter.com/eEvN4rU1Se

The Blues have struggled offensively as of late, lacking a true superstar in the striking department. The departure of Werner to RB Leipzig, Lukaku to Inter Milan, and Hudson-Odoi to Bayer Leverkusen has only compounded the issue. Ziyech is also rumored to be on his way out of west London.

Chelsea signed Raheem Sterling from Manchester City in return but they’re still having a hard time finding the net. It appears manager Thomas Tuchel is reluctant to let Pulisic leave as the club’s attacking options are already dwindling.

The west London football club has suffered two shocking defeats to Leeds United and Southampton in their first five Premier League games. Meanwhile, Pulisic has started in zero of them and provided minimal production as a sub.

It appears the American international is open to, if not hoping for, a transfer away. Manchester United, Newcastle, and Juventus are among the clubs interested. However, Chelsea has the final say and it’s currently not in their cards.

Talks to bring in Barcelona’s Pierre-Emerick Aubameyang have stalled, so it’s unlikely Chelsea will add more attacking depth this season. Instead, they’ll hope their current options including Pulisic will serve as enough.

With the Qatar World Cup approaching in November, the current situation isn’t ideal for Christian Pulisic. If he wants to stay in peak condition for the USMNT squad, he’ll need to see more playing time with the Blues.