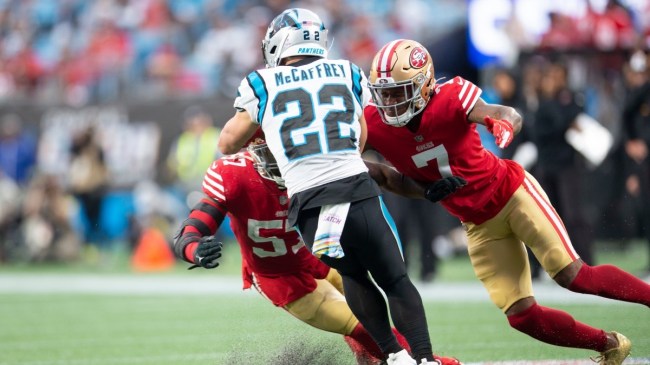 Christian McCaffrey is one of the most electrifying players in the NFL. The Carolina Panthers running back has already had multiple 1000-yard rushing seasons and multiple 100-catch seasons and is one of the most versatile weapons in the league. He’s only 26, too, and still has a lot of good football ahead of him. So far this year, he is averaging over 100 yards per game from scrimmage as he remains one of the best weapons in the league.

But, the Carolina Panthers are terrible. They sit at 1-4 and just fired Coach Matt Rhule. So, a full rebuild is on the way in Carolina. That means they will be sellers through the NFL trade deadline on November 1st. And, it could mean that his time in Charlotte is coming to an end.

Christian McCaffrey is on the trade block

The Carolina Panthers are listening to other teams about a potential trade for star running back Christian McCaffrey, although a deal might not be easy to complete, league sources tell ESPN.https://t.co/96y8r4AiCK

Schefter went on to say, in part:

The Panthers rebuffed at least two teams’ inquiries into trading for McCaffrey last week and will continue to reject overtures they don’t consider significant offers, according to sources.

Listening hardly means the team is dealing McCaffrey. If the Panthers do not receive what they feel is a real offer — with a high draft pick or multiple picks — they are adamant that they will hold on to McCaffrey past the NFL’s Nov. 1 trade deadline, sources told ESPN.

He would be a huge piece moved at the deadline and could make a difference for someone trying to win a Super Bowl.

There’s speculation about where he will end up

One of the teams that makes a lot of sense is the Buffalo Bills. They’re one of the Super Bowl favorites and it seems like a stud running back like CMC would put them over the top.

And, Jonathon Jones of CBS Sports reporters there are a few major contenders that already have reached out.

Inside today’s piece: The Broncos, 49ers, Rams and Bills are among the teams that have shown varying degrees of interest in McCaffrey. https://t.co/wHpnlFOXtx

It should be a packed and exciting NFL trade deadline, especially if CMC gets moved.