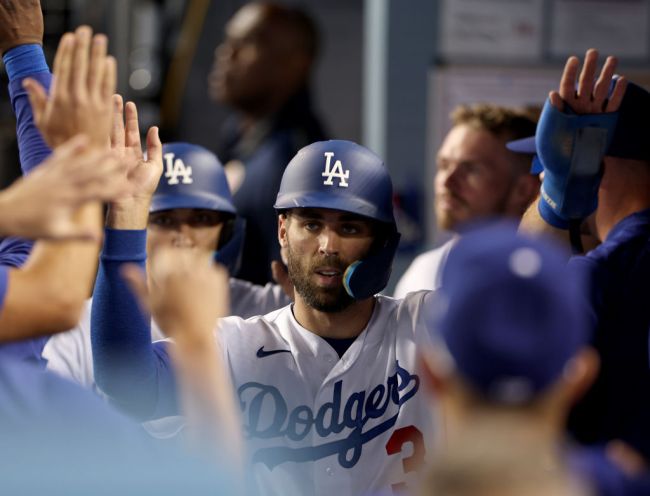 There’s something about Milwaukee that just brings out the best in Chris Taylor.

The Los Angeles Dodgers traveled to face the Milwaukee Brewers on Tuesday night and Taylor was doing the absolute most to help his team win. After giving up two early runs in the 1st inning, the Dodgers were able to close the gap at 2-3 by the 5th.

Still trailing by one in the 7th inning, the Dodgers center fielder stepped up to the plate and homered for the game-tying run. But Taylor’s night was just getting started.

With the score tied, the game entered extra innings. Taylor’s heroics were needed once again and he delivered with a spectacular diving catch to save the game.

CHRIS TAYLOR, ARE YOU SERIOUS?! pic.twitter.com/nCsOVhu2tr

With two runners on base in the bottom of the 10th, Brewers’ Andrew McCutchen hits a deep fly into center field for what appears will be the game-winning hit. Taylor had other plans though and leaps up to snag the ball over his shoulder.

It seems Taylor wasn’t ready to let the night end quite yet. His impressive feat pushed the game into the 11th inning allowing the Dodgers to take the lead.

Immediately, the announcers noted how similar Taylor’s play was to his game-saving catch during Game 7 of the 2018 National League Championship Series. It’s crazy how baseball works in mysterious ways. Both plays were diving catches in the exact same outfield gap against the Brewers.

While the Dodgers went on to win the NLCS in 2018, they weren’t as fortunate on Tuesday night. Taylor’s late-game heroics ran out after they took the lead in the 11th inning and the Brewers walked it off with a bases-loaded single.

With two games left in this series, it’s probably best if the Brewers avoid Chris Taylor and his diving catches.