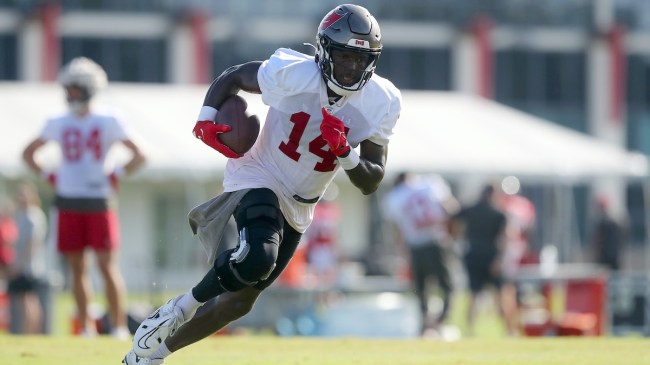 It hasn’t been an easy off-season for Buccaneers wide receiver Chris Godwin, but his return to the gridiron could be imminent after suffering a torn ACL during Week 15 last season.

The Super Bowl LV champion finally stepped back onto the practice field without a brace earlier this week. Then, much to the delight of Bucs fans and Godwin fantasy football owners, he was listed as a full participant during Wednesday’s practice.

It appeared Godwin was on track to play in the Bucs’ season opener. However, he gave reporters a more cautious injury update after not practicing on Thursday. Apparently, even the Bucs WR isn’t sure what his status will be for Sunday.

Video: Chris Godwin talks about the difficult decision ahead of when he’s ready to return to play from knee surgery. pic.twitter.com/vtX96fJdjp

“Honestly, I think it’s a very complicated process… I think whenever the time comes for the game, I think everybody will know, but until then, even I’m not sure.”

Despite making significant progress in his recovery, Godwin isn’t getting too ahead of himself yet. A torn ACL is a brutal injury. So returning too soon without proper healing could make matters worse, and that’s not something he or the Bucs want.

Godwin explained how “each day feels different from the day before,” hence why the timetable for his return remains uncertain. With the Buccaneers’ Week 1 matchup against the Dallas Cowboys just days away, Godwin is an expected game-time decision.

While he didn’t rule out suiting up for Sunday, his later comments suggest the Bucs will take things slowly.

Telling quote from Chris Godwin, on the Bucs' overall depth on offense: "That really helps me in my process, allows me to feel comfortable waiting until I feel really comfortable to go out there and play."

Tampa Bay’s receiving corps is talented enough with Mike Evans, Julio Jones, and Russell Gage, so there’s no rush for Godwin to return. Fans shouldn’t expect a full workload even if he plays against the Cowboys.

Whether Chris Godwin takes the field or not, it’s a step in the right direction for the Tampa Bay Buccaneers.