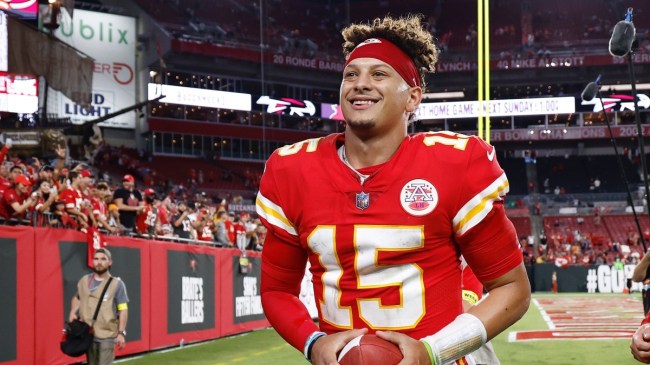 All off-season people talked about how the Kansas City Chiefs couldn’t possibly be the same without star wide receiver Tyreek Hill. After all, Hill’s gamebreaking speed opened up so much for Patrick Mahomes and company. And, they had no clear replacement for the now-Dolphin Hill.

But were people wrong. The Chiefs’ offense is as good as ever and just dumped 41 points on the Tampa Bay Buccaneers as they beat Tom Brady and the Bucs.

The Chiefs have been absolutely lighting it up

Kansas City has not missed a beat without Hill, who his having a great season of his own.

Here's where the Chiefs' offense ranks through 4 games of the post-Tyreek Hill era:

Patrick Mahomes is 1st among starting QBs in EPA per pass play.

Yeah, that’s pretty good. They’ve been spreading it around, too. Travis Kelce is still a superstar, but guys like Juju Smith-Schuster And Marquez Valdes-Scantling have stepped up, too. Running backs Clyde Edwards-Helaire, Jerick McKinnon and Isaiah Pacheco have also shined.

Outside of Mahomes, though, most of the credit has to go to the offensive line. It’s been nothing short of outstanding so far and opens up a ton in Andy Reid’s playbook. Giving Patrick Mahomes a ton of time to throw is a dangerous proposition and that’s what they’re doing.

They’ve always been fun to watch, but things may have been getting stale last season. Not so much now.

I’m not sure I agree with the analogy, but I appreciate the sentiment.

Chiefs offense is playing like a podcast at 1.5x speed. Perfect.

Relentless is a great word to describe what this offense is right now. They can attack teams from so many formations and concepts with different personnel groupings.

The @chiefs offense is back to their relentless ways.

Mahomes looks like the league’s best quarterback once again

Look at this absolute sorcery from Mahomes. It’s Mahomes at his best. He has 11 touchdowns and just 2 picks through the first four games and may be the MVP of the first quarter of the season.

WHAT WAS THAT?! @PatrickMahomes

Mahomes has thrown 4 TD passes in his career after scrambling 30+ yards. No other QB has more than one since 2018.#KCvsTB | Powered by @awscloud pic.twitter.com/DX2HvcJm3a

Lebron James had to put out a tweet about it, because of course he did.

And while nobody likes Jackson Mahomes, were are lucky to get to watch Patrick.

We are blessed to be able to watch Patrick Mahomes play football.