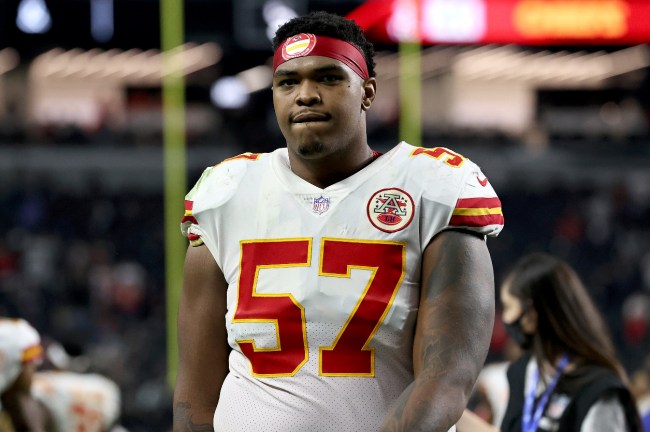 The Kansas City Chiefs offense is going to look much different when September rolls around. Tyreek Hill is in Miami, which is already a massive loss for Patrick Mahomes and the offense.

JuJu Smith-Schuster is in town and entrenched as the top wideout — for now. Of course, Travis Kelce is still there, and Ronald Jones came in to compete with Clyde Edwards-Helaire.

Well, the Chiefs got bad news regarding offensive lineman Orlando Brown Jr. The two sides have been trying to work on a long-term extension all offseason. According to Ian Rapoport of NFL Network, those talks have stalled, and now Brown will play under the franchise tag for the 2022 campaign.

The #Chiefs and OT Orlando Brown did not come to an agreement on a long-term deal, per agent Michael Portner. As @MikeGarafolo said recently, the gap was too large. Brown now will play it out.

Sure, Brown will play in the 2022 season for the Chiefs. But being unable to keep him long-term would be another tough blow for Kansas City.

The Chiefs gave up a lot to acquire Brown from the Baltimore Ravens, so keeping him at Arrowhead has to be a priority.

Orlando Brown has passed his physical with the #Chiefs and the trade with Baltimore is now official.

But, this latest update isn’t good news, and it could be that the 2022 campaign is Brown’s last in Kansas City. The Chiefs even reportedly offered Brown a six-year deal — which was turned down.

KC offered Brown the highest signing bonus and APY on 6-year deal, but Brown’s team decided there wasn’t enough security over the life of the deal.

It’s a significant risk, and fans aren’t sure how to feel about Brown’s future being a bit cloudy.

Orlando Brown Jr. is MASSIVELY betting on himself.

I hope he actually plays it out and we get a long term deal done sometime this season https://t.co/pHD7mFdm8f

There’s still a possibility that the two sides will agree on a long-term deal. The contract was close to getting done, but it looks like Brown wants more security than the Chiefs offered him.

And yes, the Chiefs offered Orlando Brown Jr. a 6-year deal that was just over the average salary per year than what Trent Williams signed with the 49ers last year ($23 million).

The structure of the deal, though, was the issue for Brown.

The Chiefs gave up a ton to acquire Brown, and letting him walk at the end of the 2022 season won’t benefit Mahomes and company.