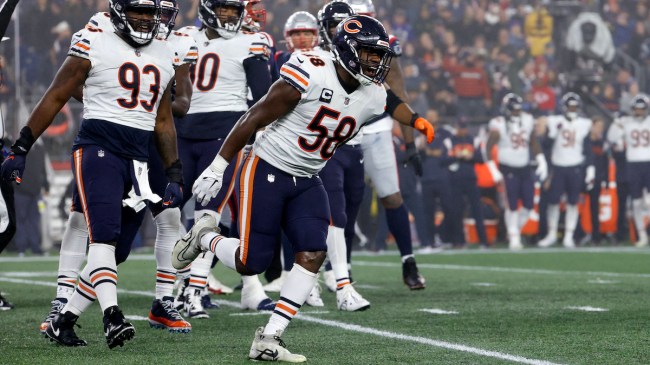 After a brutal 49-29 loss to the Dallas Cowboys on Sunday, it appears the Chicago Bears are fully entering rebuild mode for the 2022-23 season.

Everything was set into motion just a week ago when the Bears traded away Pro Bowl DE Robert Quinn to the Philadelphia Eagles. The Bears now sit 3-5 following Week 8 and trail the NFC North-leading Minnesota Vikings by 3.5 games.

On Monday, the Bears took the next step in looking toward the future. In a blockbuster move, they traded star LB Roquan Smith to the Baltimore Ravens in return for second- and fifth-round picks along with veteran linebacker A.J. Klein.

The move isn’t all too surprising at least. Smith was playing out the final year of his rookie contract and set to hit free agency following the end of the season.

The two-time second-team All-Pro linebacker had previously demanded a trade during the preseason after negotiations on a contract extension fell through. While he eventually returned to practice in August, it seems Smith’s request is finally going through.

With the departure of Quinn and Smith, the Bears have now received a second, fourth, and fifth-round pick in the last week. They’ll have nine total picks in the 2023 draft to build around QB Justin Fields.

Roquan Smith, who leads the NFL in tackles this season, will be a major addition to the Ravens’ inconsistent defense. Only veteran linebacker Bobby Wagner has more tackles since Smith was drafted eighth overall in the 2018 NFL Draft.

Here’s what Baltimore is getting in its trade with Chicago: Roquan Smith leads the NFL in tackles this season, and over the last five seasons, only Bobby Wagner has more tackles than Smith.

Ultimately, it’s an understandable trade for both teams. The Bears are looking ahead to rebuild with a rookie head coach and a young quarterback. The Ravens are hoping to bolster their defense for a playoff and potential Super Bowl push.

Even still, fans are somewhat divided in their opinions on the trade. Given Smith’s talent and impressive production, some believe the Bears could’ve received more value for him.

I know off-ball linebackers don't demand much return on the trade market.

But if the best the Bears could get for Roquan Smith was a 2nd and a 5th, they should have just kept him on the roster. He's the type of piece you build a defense around.

Of course, others thought the Bears made the right decision. After previous failed negotiations, it’s unlikely the team would’ve easily re-signed Smith in free agency. So instead they chose to offload him in return for picks while they still could.

Roquan Smith wants $20M+ per year and Ryan Poles smartly understands that makes zero sense for a team that still needs to build out an offense, plus needs major edge rush help

Winners of the deadline

It’s a tough loss for the Bears either way, but time will tell who the true winner of the trade is.

Smith will make his debut with the Ravens in Week 9 for Monday Night Football against the New Orleans Saints.