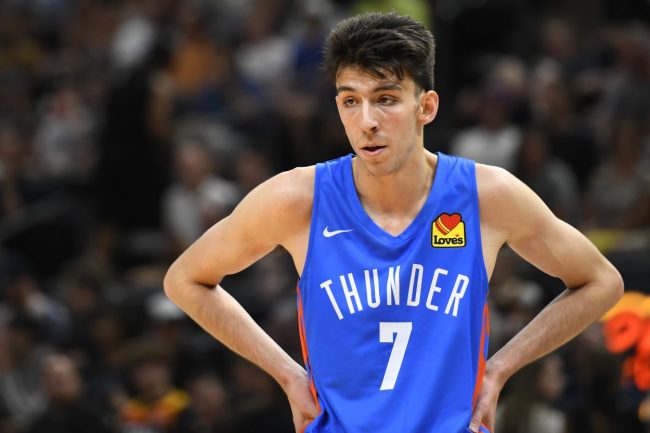 Chet Holmgren has been a household name since well before he joined the Oklahoma City Thunder.

The basketball star dominated at Gonzaga and his unique size and skill set make him a potentially generational player. Now he’s showing that talent at the professional level.

Chet looked more like the HS version of himself with the freedom to create so much off the dribble. Just better. pic.twitter.com/g2ivpAxvhi

He’s not settling for just first-game success, either.

"That's a record?… Well I'm coming to break it again"@ChetHolmgren after setting the Utah Summer League Record for blocks with 6. pic.twitter.com/ygENsHwQ0l

Holmgren’s absurd length combined with his guard-like skills make him a truly unique prospect, with offensive skills similar to that of Kevin Durant and shot-blocking prowess that rivals Rudy Gobert.

Basketball fans are already marveling over what he could become after Wednesday’s incredible showing.

The second coming of KD in OKC🙌 https://t.co/e91MNfSPC6

Just summer league but you only make one first impression. https://t.co/6XfukhyS0f

All his opponents can do is shake his hand and say good game https://t.co/iuNosx1a0s

One common theme in the discussion was whether Holmgren should’ve gone No. 1 to the Orlando Magic. Instead, the Magic selected Duke’s Paolo Banchero. Banchero will begin his pro career on Thursday night against the Houston Rockets and No. 3 overall pick, Jabari Smith.

A lot of you saying "dont overreact to Chet, it’s just Summer League" will overreact to whatever Paolo does anyways so what’s the point lol

Paolo has a higher floor but his ceiling not close to Chet.

Banchero and Smith are both incredibly intriguing prospects in their own right, but for now it’s Holmgren who has captivated the basketball world.