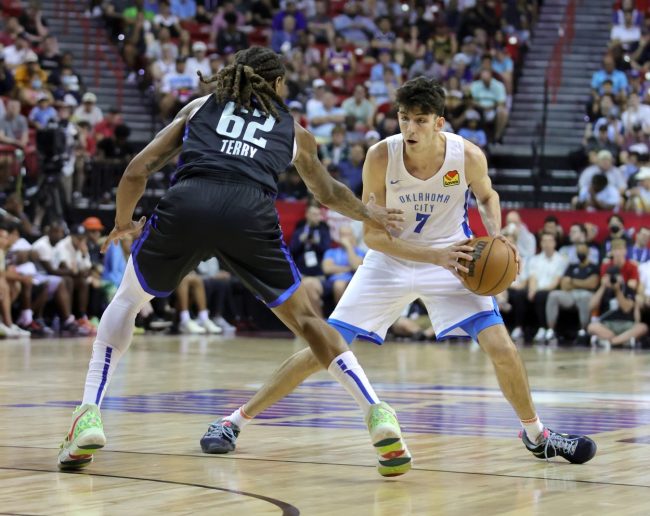 The news about as bad as Oklahoma City fans could’ve possibly hoped for.

Shams Charania of The Athletic reported Wednesday that first-round pick Chet Holmgren suffered potential ligament damage in his. Charania also noted that the team was evaluating the No. 2 overall pick further to determine a timetable for his recovery.

Less than 24 hours later, that timetable has been determined. And it’s not a positive one for the Thunder, its fans, or Holmgren.

Oklahoma City Thunder 7-footer Chet Holmgren will miss the 2022-2023 season with a Lisfranc injury to his right foot. Holmgren, the No. 2 pick in the 2022 NBA Draft, suffered the injury in a Pro-Am game in Seattle on Saturday.

ESPN’s Adrian Wojnarowski reported Thursday morning that the 7-foot, 190-pound big man will miss the entire 2022-223 season due to a Lisfranc injury.

Holmgren suffered the injury when trying to stop LeBron James on a fast break in a scrimmage. The two were competing at Jamal Crawford’s CrawsOver Pro-Am in Seattle. That game was eventually cut short due to moisture on the court that caused unsafe playing conditions.

Holmgren’s slender stature and how he would hold up at the pro level were always concerns. Those concerns led in part to the Orlando Magic surprising everyone and taking Duke’s Paolo Banchero with the first pick.

Having seen those fears immediately realized, Thunder fans couldn’t believe what was happening.

bro he’s missing the whole season????? That suuuuuuuucks so much https://t.co/XboPKcD559

“Certainly, we are disappointed for Chet, especially given the excitement he had about getting on the floor with his teammates this season. We know Chet has a long career ahead of him within our organization and the Oklahoma City community. One of the things that most impressed us during the process of selecting Chet was his determination and focus. We expect that same tenacity will carry him through this period of time as we work together and support him during his rehabilitation.”

How much would you pay to watch Russ and PatBev go at in practice? https://t.co/APnnp34CMf

There is good news for Holmgren. Each of Joel Embiid, Blake Griffin and Ben Simmons missed their rookie seasons due to injury. They then went on to become stars in the league.