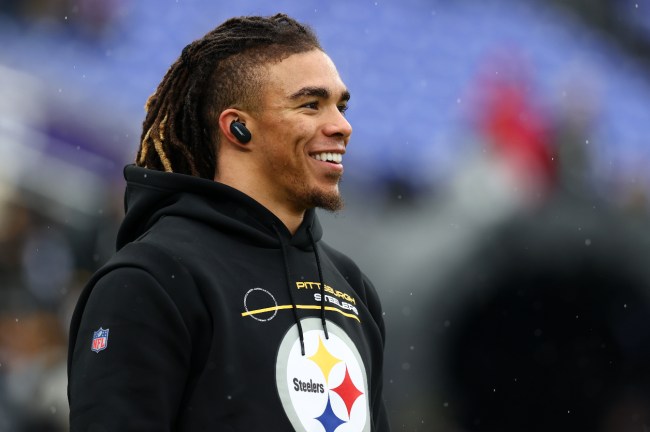 Pittsburgh Steelers wide receiver Chase Claypool is definitely a confident player. After a successful career at Notre Dame, he has yet to put together a 1,000-yard campaign in two seasons in the NFL.

Despite that, Claypool is full of confidence and made a shocking claim while appearing on the latest episode of the I Am Athlete podcast with LeSean McCoy, Brandon Marshall, and Adam “Pacman” Jones.

Here is what Claypool said:

Yeah, Claypool said he’s a top-three WR in the NFL.

Obviously, this statement did not go over well with NFL fans. Tyreek Hill, Justin Jefferson, Davante Adams, Cooper Kupp, Ja’Marr Chase, Deebo Samuel, and the list just goes on and on of wide receivers that deserve to be in that top-3 conversation.

Claypool, as of now, should not be anywhere near that list, and the consensus among fans is in agreement.

Dude you aren’t even Top 3 on the team https://t.co/E5hTkJ4wwt

He’s barely a top 3 receiver on his own team https://t.co/fGpapQs78D

I can name 40+ receivers I’d take over Chase Claypool https://t.co/upYmLlau88

Not even the best on his team 🥱 https://t.co/J7MDXB6FWb

Can he please stay quiet just once? Like I love him, But top 3, really Chase? https://t.co/2zBf9ce0m4

Dude ain't even top 3 in his division https://t.co/soHdfZWu7F

Is Chase Claypool even a top three WR in the AFC North? https://t.co/iKQ0BmhWMa

I mean, confidence is fine and all. But he's not even the best WR on his team. Not by a mile. Also? He's got a TON of work to do to be a complete wideout. That's just the reality. #Steelers https://t.co/uUnJ5gPuL2

Let’s not discredit Claypool for having overflowing confidence in his ability. After all, he has only been in the NFL for two years and had to compete with Diontae Johnson and JuJu Smith-Schuster for touches. So, maybe he turns it on and becomes one of the best WRs in the NFL.

Who knows. But, as of now, he isn’t anywhere close to top-3 material.