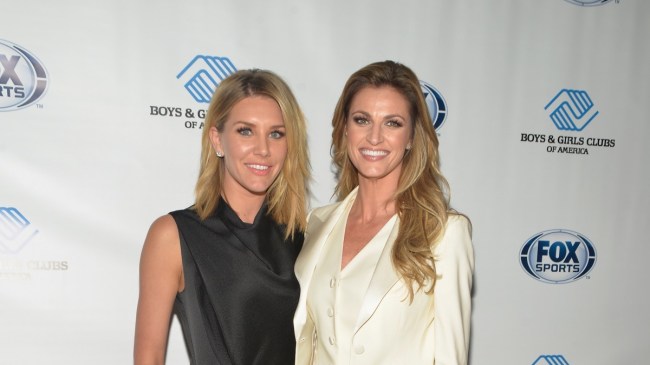 Charissa Thompson and Erin Andrews are two of the most recognizable figures in sports media. Both of them work for Fox Sports as sideline reporters and hosts, and Thompson is also doing duties for Thursday Night Football on Amazon Prime. The two of them also started a podcast last February titled “Calm Down with Erin Andrews and Charissa Thompson”. The podcast describes itself as the following.

Calm Down With Erin Andrews and Charissa Thompson is all about the conversations you would have with your friends when you think others aren’t listening. It’s like a text chain put into a podcast. This is the place where Erin and Charissa get real, and no subject is off limits. It’s a “pull back the curtain” look into their lives, while they also ask questions about everyone else’s. Get ready for unfiltered conversations between two girlfriends about life, gossip, sports, and pretty much every random topic that needs to be dissected. Get ready to Calm Down with Erin and Charissa.

The conversation took a spicy turn with Thompson telling Andrews about losing her virginity.

Late in the podcast, Thompson told the following story.

Oh, on the pregame… we were talking about our first kiss. I had my first kiss when I was 12 years old, But I lost my virginity early. I’m just gonna go right into it. I mean, well, look, I’m still friends with the guy. But how about this? I lost my virginity at 15 years old. So you think about it now like a 15-year-old,like, ‘oh my god that’s so young.’ that was my boyfriend all the way into high school.
I mean, you know, you’re young when I had braided pigtails. When I like went over to this. It was all arranged… I was just like, this was like my love. He went to a different junior high than I did. And we met because I played on a basketball team with girls that (went to his) junior high and we met and we fell in love. And then he was my boyfriend all the way through until like junior year in high school and then he broke up with me because he dated a sophomore,

Andrews was not shocked by this, interjecting to say she wasn’t shocked. She also said that fifteen isn’t that young anymore, even though research shows teenagers are having less sex than in quite some time.

Andrews also pointed out that Thompson had recently worn pigtails, so maybe that wasn’t the best sign of her youth.

Of course, this was followed up by Andrews saying she found out that Santa Claus wasn’t real around the same time Thompson was losing her virginity.

Erin Andrews is married to former NHL player Jarret Stoll. Thompson is back on the market, after her divorce to sports agent Kyle Thompson was announced in April.