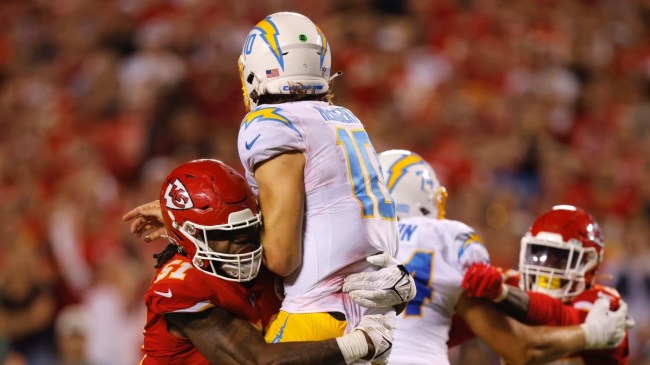 Chargers quarterback Justin Herbert is one of the faces of the NFL. The third-year quarterback has the most passing yards in history in someone’s first two seasons and his arm talent is off the charts. Many think the Chargers are real Super Bowl contenders and he’s a big reason why.

But, in Thursday night’s 27-24 loss to the Kansas City Chiefs, Herbert got hit hard in the midsection and was significantly affected the rest of the game. The injury could be a lot of things, and some of them are serious.

Herbert took quite the shot to the midsection

In the fourth quarter of the Chargers’ loss to the Chiefs, Herbert took quite the shot on a crucial 3rd-down conversion.

Herbert spent a lot of time on the ground and had to leave the game for one play. He came back in and actually led a touchdown drive late. But, he was in a ton of pain. On one crucial play, he appeared to have plenty of room to run for a first down but his body seemed to quit on him when he accelerated and he had to throw it away.

After the Los Angeles loss, attention will now go to Herbert’s midsection.

Barstool’s Steven Cheah points out that it could be a spleen injury for him. Obviously, that would be one of the worst-case scenarios and would keep him out for ahilw.

Any chance this is a spleen injury for Justin Herbert @CSimmsQB?

Someone had to bring up the famous Byron Leftwich drive in the GMAC Bowl when he played for Marshall.

Herbert on this drive pic.twitter.com/uGM8BfvcJM

For now, fans are just hoping one of the league’s brightest young stars is okay and won’t miss serious time.

Herbert actually got the starting job as a rookie in 2020 because a Chargers team doctor punctured Tyrod Taylor’s lungs while giving him an injection. Hopefully He avoicds that fate.