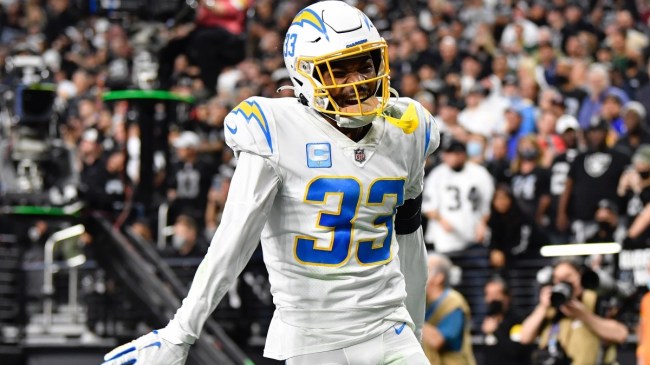 Let’s face it, we don’t see as many big hits in the NFL as we used to. The rules have legislated most of them out of the game, and for good reason. But, no one told Chargers safety Derwin James.

James is one of the best safeties in the league and he is matching up against Travis Kelce frequently in the Chiefs-Chargers game. And, on a crucial third-quarter play, James made one of the highlights of his young career so far.

Here is the hit that has social media on fire.

It was ruled not a fumble, but still, what a hit! Travis Kelce is no small man either. It shows just how strong Derwin James is. Naturally, Twitter was on fire with reactions.

DERWIN JAMES WITH A SPINEBUSTER

The Wilbon-Stephen A. Smith meme is always a winner.

That tackle by Derwin James pic.twitter.com/oJOgYdr5rU

Obviously, Derwin James has that dog in him.

This will surely be one of the highlights of this NFL season.