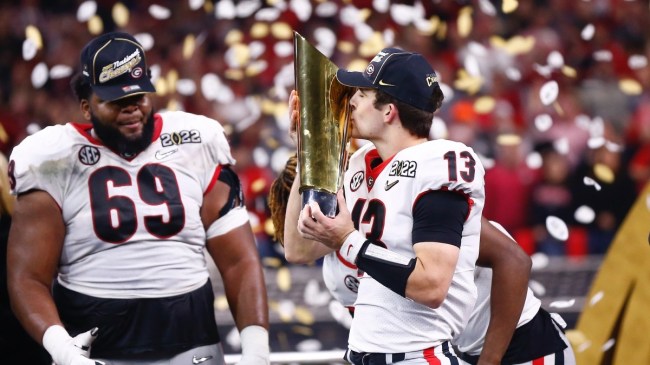 The long-rumored expansion of the College Football Playoff appears to have finally been agreed on, according to multiple sources.

Pete Thamel of The Athletic was one of the first with the news that will forever change college football.

Sources: The CFP Board of Managers has decided on a 12-team College Football Playoff during today’s meeting.

Last year, the committee, made up of one university president from each conference plus the president of Notre Dame, could not come to an agreement amidst riffs between the conferences. That was not the case this year, as it seems like the vote was unanimous to expand the playoff starting in 2026 at the latest, according to The Athletic’s Nicole Auerbach.

JUST IN: A 12-team College Football Playoff has been approved by unanimous vote by the CFP Board of Managers, a source tells @NicoleAuerbach. pic.twitter.com/QdpSbIh0l6

We still do not know where games will be played. whether that is on the higher seed’s home field, all neutral site games, or a mix of both remains to be seen. But most importantly, it’s unclear if the new format will start in 2026 or possibly as soon as 2024.

Almost all fans want some games to be played at host sites, and @Eddie Rado on Twitter is one of them.

Give us the first round games of the 12-team playoff at home sites and we're really in business. Keep pushing.

Opinion on the announcement seems to be split

There is a surprising amount of dissent amongst college football fans, despite the fact that the news likely increases the chances their favorite program will get to play in the playoff soon.

Many, like @jbdude12 on twitter think this is just a money grab and not good for the sport.

Greedy execs at the top of college football are ruining the sport. Bring me back to the BCS era.

@Jacobcs23 pointed out that there haven’t been a lot of close playoff games in the four-team format and he expects it go get worse.

Greedy execs at the top of college football are ruining the sport. Bring me back to the BCS era.

Of course, some people are all for it. @BBHRobert is one of those.

At the very least, it appears that we will be getting a higher number of meaningful college football games in the near future.