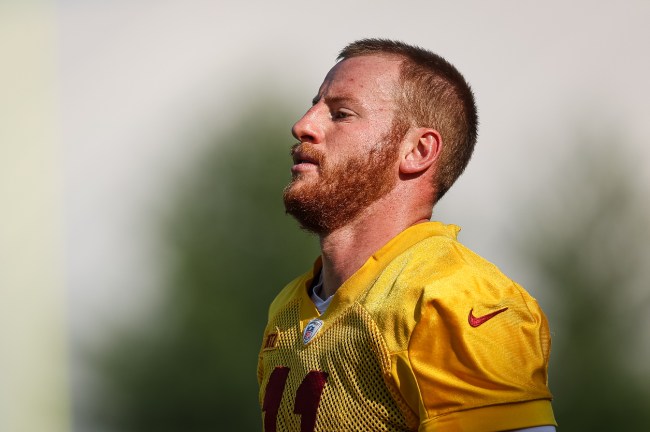 The Washington Commanders traded for Carson Wentz earlier this offseason and are rolling him out as their starting quarterback.

With the NFL season right around the corner, excitement is brewing. Commanders fans have every right to be excited about what’s ahead, especially after locking up Terry McLaurin on a new extension.

However, Friday’s practice brought about a play that might not make Wentz look too good. Here’s the play, as Matthew Paras of The Washington Times details.

You don’t hear this too often: Montez Sweat was chasing a scrambling Carson Wentz from behind and was yelling “Get rid of it! Get rid of it!” Wentz ran out of bounds instead.

Commanders fans weren’t too happy after reading this from Paras, and Carson Wentz might want to mute his mentions for the time being. NFL fans, in general, were not very surprised by this.

Literally every Eagles fan when he was scrambling https://t.co/QJO4IAQBur

I couldn't imagine 😂😂
Actually I can.. gonna be a LONNNGGG SEASON @Geechi4848 https://t.co/V7HMgDIePa

Idk, I think I've heard this sort of thing too often about Carson Wentz https://t.co/OW6pjxIA32

The reputation of Carson Wentz has taken a hit. First, it was with the Philadelphia Eagles, then last season with the Indianapolis Colts.

So far, he isn’t off to a hot start while trying to impress the Commanders. However, it is only practice, so maybe Commanders fans should relax a little bit.

Disney who? Costco is truly the most magical place on Earth. https://t.co/lMQipCTJCw