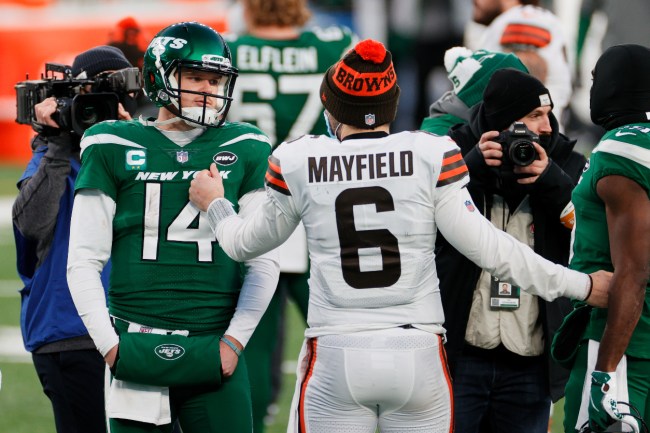 The Carolina Panthers have finally ended a long, ongoing rumor mill of Baker Mayfield trade talk. The Cleveland Browns sent Mayfield to Carolina for a future draft pick and are prepared to roll him out as the starting quarterback.

However, a new report states that Mayfield and Sam Darnold will enter training camp in a QB battle.

Sam Darnold had a good spring for the #Panthers and they're by no means handing the job to Baker Mayfield. There will be a training camp competition between the 2018 Nos. 1 and 3 overall picks.

The Panthers QB Room Has Had Its Fair Share Of Struggles

That is a lot of muddled talent and rookie Matt Corral, who was expected to compete with Darnold for the starting gig.

How bad is this collective QB room? Well, let’s look. This one Tweet basically sums it all up.

The Carolina Panthers QB room in the last 2.5 years:

The Panthers also brought back Cam Newton last season, and that was a massive failure. Let’s not forget the ridiculous contract they gave to Teddy Bridgewater, who they later traded to the Denver Broncos after the Panthers acquired Darnold from the New York Jets.

The Panthers’ recent QB success has been brutal, and now they are bringing in Mayfield to the fold in hopes of fixing the issues. But, at least to the latest report, Darnold and Mayfield will duel it out in camp.