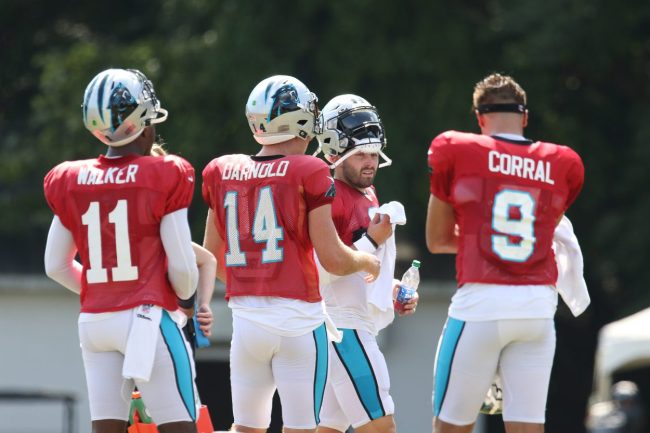 Carolina Panthers head coach Matt Rhule is playing his cards close to his vest. Despite the Panthers going out and acquiring Baker Mayfield in a trade with the Cleveland Browns, Rhule has yet to name a starting quarterback.

Carolina had a trio of options at the position with Mayfield, last year’s starter Sam Darnold and third-round draft pick Matt Corral. Though history says that none of the three options are a sure thing and Rhule has an interesting history with Mayfield.

Robby Anderson, who finished on the team in receiving a year ago, has publicly backed Darnold. But the wideout says that it wasn’t meant as a shot at Mayfield. Despite the battle for the starting job, Darnold and Mayfield appear to be on pretty solid terms.

The Panthers also have XFL and NFL vet PJ Walker at their disposal. Walker has started just a pair of games in his NFL career, however, and appears set to play a backup role alongside the rookie Corral.

Despite all the confusion, Charlotte Observer reporter Scott Fowler says one quarterback has stood out head and shoulders above the rest.

Matt Rhule won't say it, and it sounds like it won't be official until after Aug 19 preseason game, but one QB is clearly winning the Panther starting quarterback competition. My column from Spartanburg: https://t.co/Ewl49Jq1o7

In Fowler’s eyes, the competition is already well in hand for Mayfield.

There’s no doubt Baker Mayfield is winning this quarterback competition. Mayfield hasn’t looked great by any means, but he’s been good enough to be better than Sam Darnold.

Carolina takes on Mayfield’s former employer, Cleveland, in week one of the regular season. Fowler says he expects it’ll be the former Browns gunslinger getting the call to start that contest.

Rhule said Saturday that he probably wouldn’t announce the winner of the QB competition until sometime after the New England preseason game Aug. 19. But it looks to me like Mayfield has taken the lead and now just needs to not mess it up and not get hurt to be able to start in Week 1 vs. his old team, the Cleveland Browns, on Sept. 11 in Charlotte.

Mayfield battled injuries throughout the 2021 season and threw for just 3,010 yards to go along with 17 touchdowns and 13 interceptions.

But if he can bounce back to his 2020 form, when he threw for 3,563 yards, 26 touchdowns and only 8 picks, then the Panthers may have just pulled off an all-time robbery.