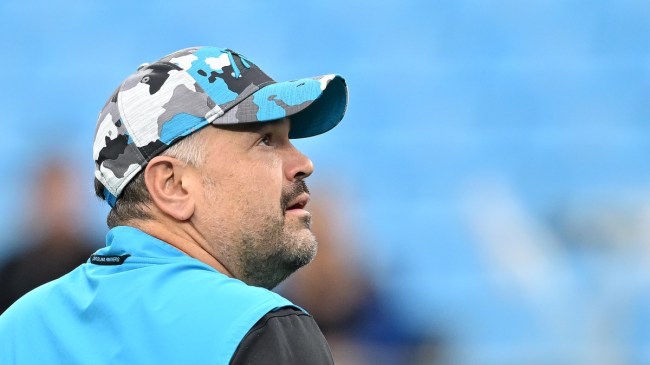 At the time of his hiring, Matt Rhule was supposed to be a home run hire for the Carolina Panthers. After all, he had walked into two impossible situations at Temple and Baylor and won big at both very quickly. His teams played smart, fundamental football and they were very clearly well-coached. The Panthers weren’t even the only team to want him, as the New York Giants were spurned by Rhule to go the Panthers instead.

Since then, it’s been a complete disaster. Rhule is 11-26 in his tenure in Carolina and the team has looked worse every season. They lost again in week 4 26-16 to the Cardinals after another dismal offensive performance despite having two of the league’s best weapons in Christian McCaffery and DJ Moore.

This stat is actually unbelievable.

The #Panthers are now 1-26 under Matt Rhule when the opponent scores at least 17 points – including 24 losses in a row.

Carolina Panther fans are fed up. The team looks seemingly worse every week.

I would rant about this is Tepper's fault and that he should fire Matt Rhule, but I'm so frigging numb at this point. It's old. This product is so uninspiring that I don't even know why I spend 3 hours a week on them.

Unfortunately for fans, his contract is an Albatross. He still has around $40 million in guaranteed money remaining. Owner David Tepper ultimately may not have a choice, though, if he doesn’t want to risk losing his fan base.

Fans simply do not care about the money issue (nor should they, it’s not their money.)

The Matt Rhule Panthers era needs to end. Like, tomorrow. I have no earthly idea what else you need to see. There's no benefit to prolonging the inevitable.

In the meantime, Carolina fans can think about this…

the Panthers are 1-3 and face the San Francisco 49ers in week five.