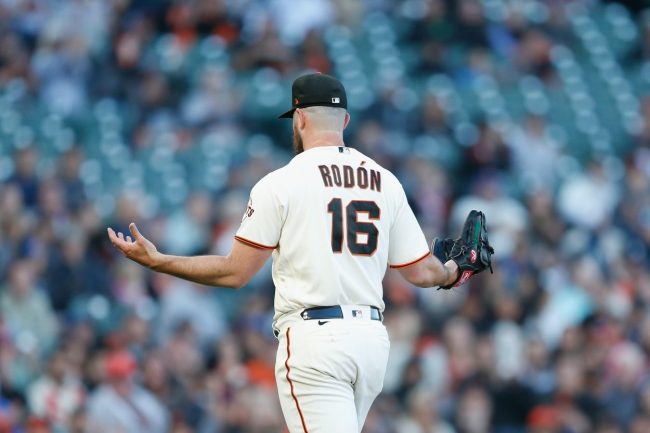 The 2022 Major League Baseball season hasn’t gone according to plan for the San Francisco Giants.

San Francisco one a Major League best 107 games a year ago under second-year manager Gabe Kapler. While the Giants were eventually ousted in the NLDS by division rival Los Angeles, the fantastic regular season led to optimism heading into 2022.

Instead, the Giants have toiled in mediocrity. They currently sit with a perfectly middling 48-48 record, two games out of a playoff spot and a whopping 16.5 games behind the Dodgers for first place in the National League West.

Unfortunately for Kapler and company, things didn’t get much better on Tuesday night. San Francisco faced off with the lowly Arizona Diamondbacks, who are dealing with their own issues. Giants’ ace Carlos Rodon, an All-Star in each of the last two seasons, was on the mound. That made San Francisco heavy favorites in the contest.

But things didn’t go according to plan. Rodon got lit up for five runs over six innings, despite giving up just three hits, two walks and striking out 10. Rodon was understandably pretty upset when he left the game.

That’s Rodon kicking a bat directly into the leg of Giants’ starting shortstop Thairo Estrada. Estrada immediately drops to the ground in pain and you can see teammates in the background who are clearly unhappy with Rodon. Thankfully, Estrada remained in the game.

But Giants fans are not particularly pleased with their ace over the incident.

Prime example of the lack of leadership and cohesiveness. Hence that 48-49 record, and 8-16 in July.

A Buster Posey dugout would never allow this. https://t.co/K6NTSoDBBl

I’ve reserved judgment on this for 20 minutes or so, and I’ve watched it at least a dozen times. Think I’m ready to make a verdict.

so wait what did he think was going to happen when he kicked the bat https://t.co/U8ylXmClIq

Hey, maybe the San Francisco 49ers are looking for a replacement for Robbie Gould when he retires?